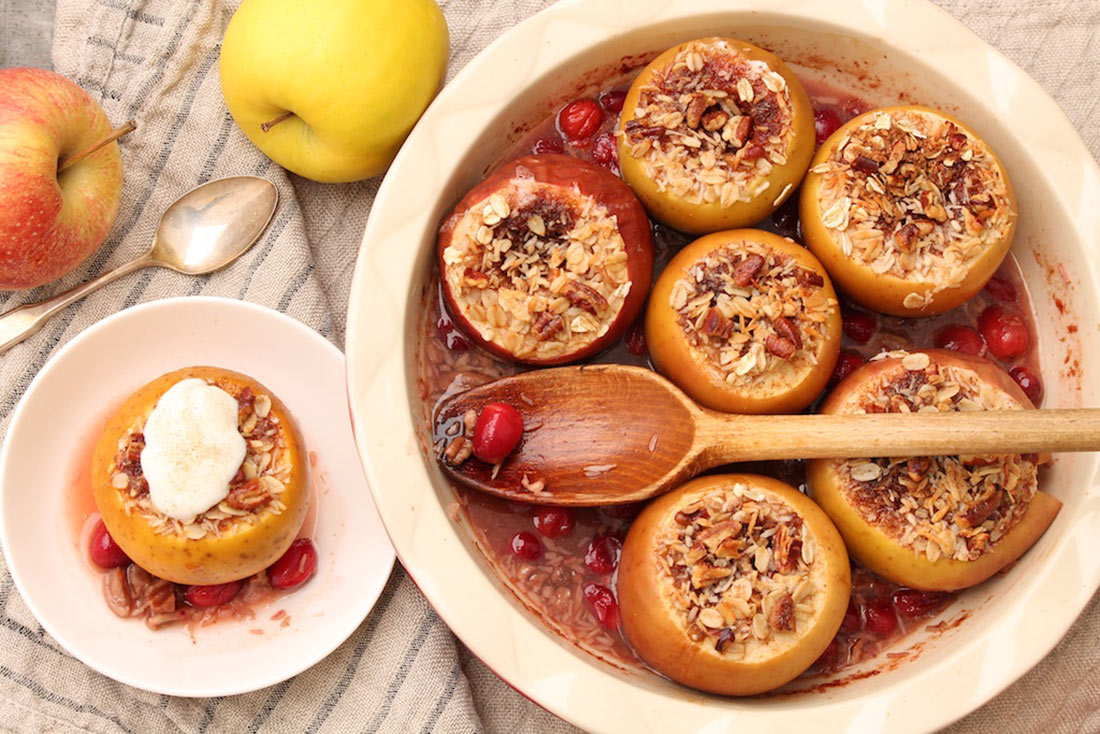 The sweet smell of warm spices and baking apples is matched only by the flavor of this easy-to-make recipe. Enjoy for breakfast with a dollop of yogurt or for dessert with a scoop of ice cream–or anytime in between!

Growing up, my family ate apple dumplings for dinner once or twice every fall.  We poured warm milk overtop and sprinkled them with a little sugar.  It was such a treat.

The memory of what some would perceive as unusual dinner fare recently inspired me to do some unofficial research. A simple text sent to several groups of friends, asking them to name the most unusual food that graced their childhood dinner plate, led to a long and lively exchange.

Some mothers got creative with leftovers–to the absolute delight of their children. One friend’s mom sliced leftover hot dogs down the middle, stuffed them with mashed potatoes, covered them with Velveeta and then baked them. Based on the reactions, I wouldn’t be surprised if these soon showed up on a handful of dinner plates.

“Weiner Winks” also proved to be a popular way to serve hot dogs when no rolls were available. For these, a hot dog was placed diagonally across bread that had been toasted with a slice of cheese on top. Opposite corners of the bread were then folded up and held together with a toothpick. As far as I’m concerned, the name alone would spark dinnertime appeal.

Some meals, however, were clearly less desirable than others.

To the consternation of one friend, chicken livers in cream of chicken soup over toast frequently appeared on her family dinner table. Not to be outdone, someone chimed in with a dinner of sardines, pickled onions and cheddar cheese served with crackers. That prompted a recollection of sardine and mustard sandwiches on white bread. Two men chimed in with mixed reviews of liver mush and pan pudding.

By that point, talk of Jell-O molds with canned fruit and Ambrosia salad was firmly embraced. For those who’ve never had it, the latter is a fruity, creamy mixture that included mini marshmallows. One friend was thrilled that it counted as salad in her house.

When I initially posed the question, I underestimated the lengthy banter that would follow. It was animated, if not a bit wistful, and occasionally tainted with mock disgust–and it all stemmed from my own fond memory of eating apple dumplings for dinner as a little girl.

In recent years, my family has taken to a crust-free version of the dumpling I so enjoyed growing up. The absence of crust makes it easier to prepare and healthier, too.  I like to bake a half dozen or so at a time, as extras reheat beautifully. A dollop of Greek yogurt over the top lends protein and staying power.

These days, we typically eat them for breakfast or lunch, but you may absolutely put them front and center on a dinner plate. To ease into the dinner idea, try serving half an apple as a side to pork or in lieu of applesauce. For a dessert option similar to apple crisp, a dollop of whipped cream or ice cream adds a hint of decadence. Sometimes, I chop leftover baked apple and use it as a topping for stovetop oatmeal or to enliven a quick bowl of Greek yogurt.

Feel free to vary the recipe by adding cranberries, raisins, a combination of nuts, or whatever sounds good to you.  Omit the coconut if you aren’t a fan.  Experimenting with different apple varieties at the same time is a great way to determine which you prefer for baking.  That way, you can compare how different apples yield varying textures and sweetness after the same amount of cooking time.   I’ve tried nearly every type of apple at some point and, though no two are the same, I’d be hard-pressed to pick a favorite! 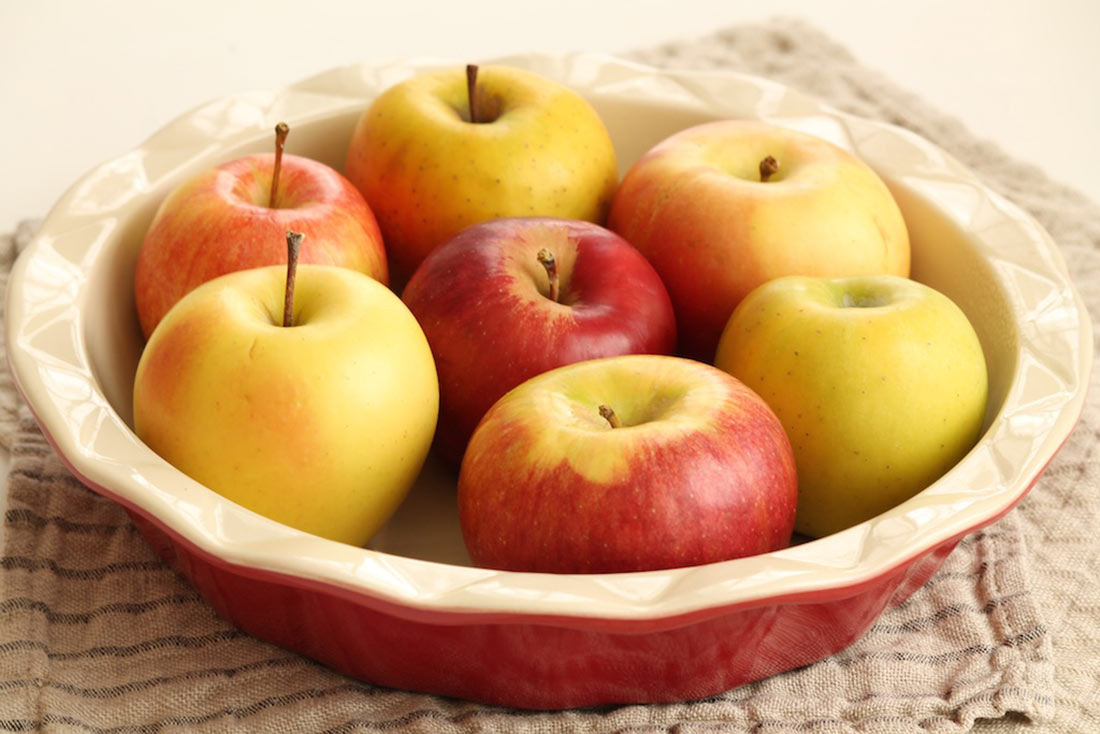 Choose four to six apples, depending on size and preference.  The recipe is flexible, so there’s no right or wrong size. 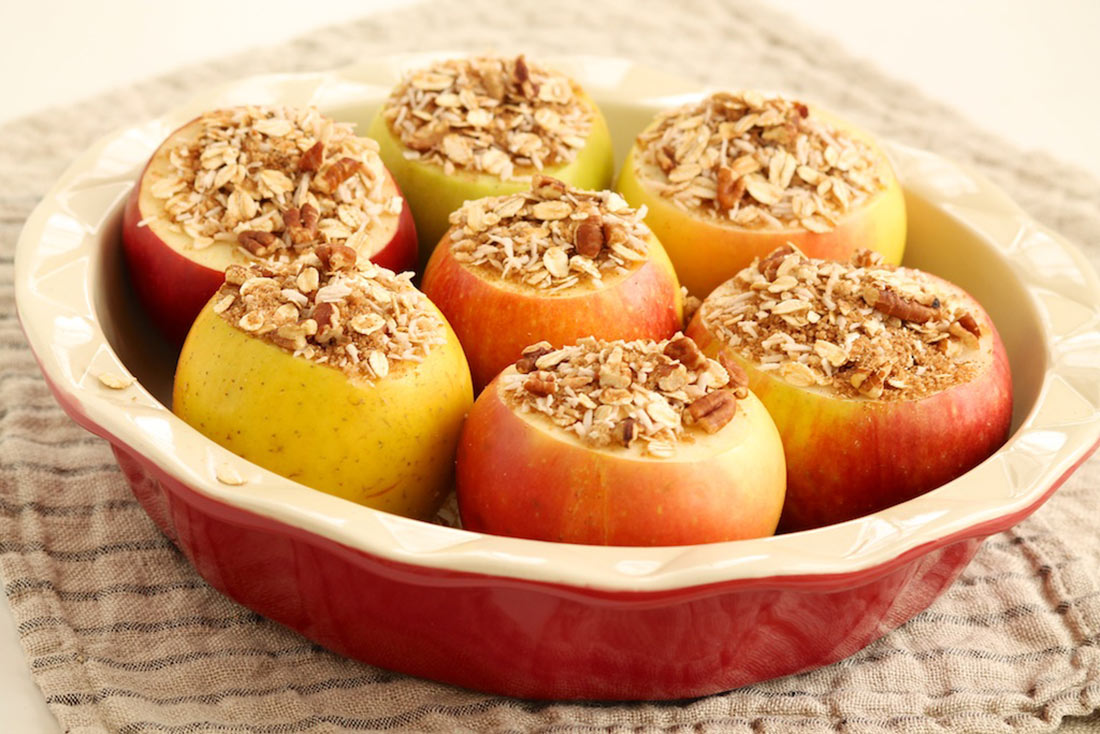 Pile extra oat mixture on top of the apples…you don’t want to skimp on that. 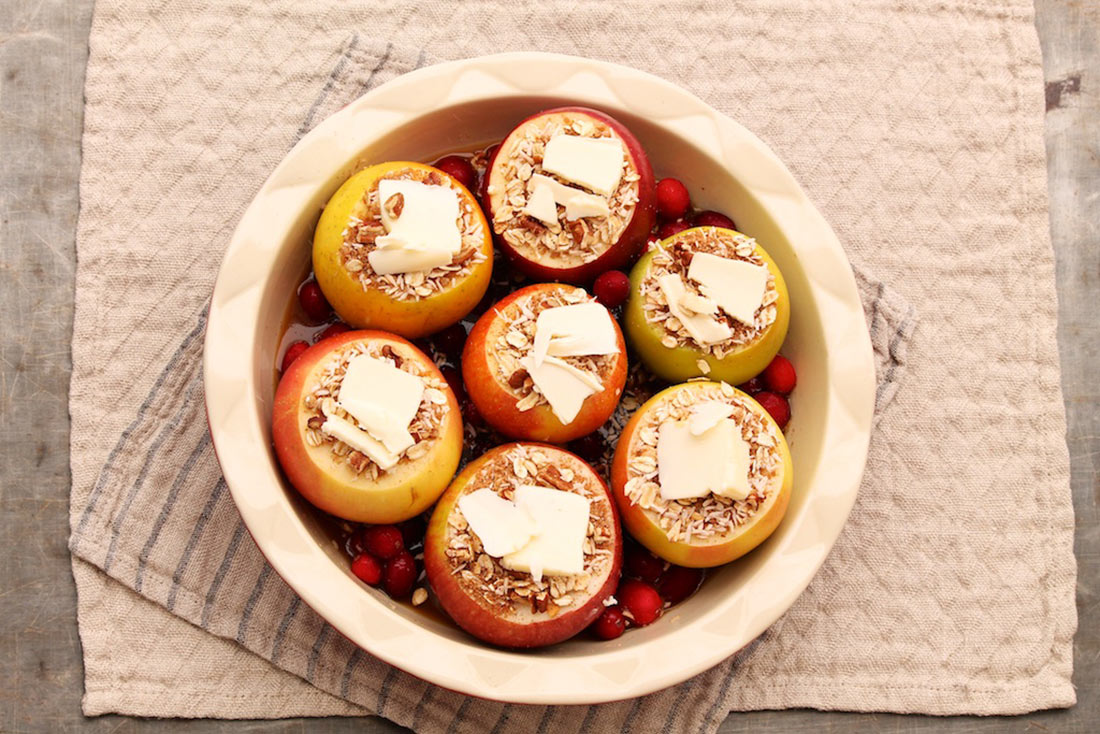 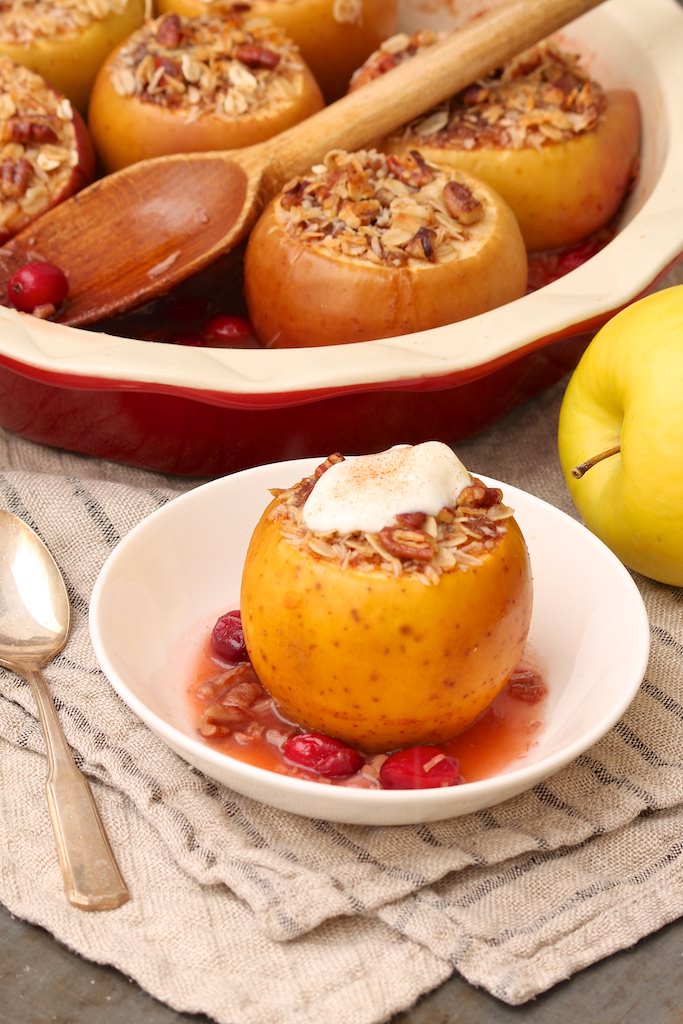 …and bake until tender and delicious.  As an added bonus, your kitchen will smell amazing. 😊

Cider Baked Apples
Yield: 4-6 servings
The simple oat mixture mimics a crisp topping, adding satisfying texture and flavor to these lightly spiced apples. Delightful for breakfast, dessert, or anytime in between, I like to reheat leftovers and add a spoonful of yogurt for a quick breakfast or lunch.
Print
Ingredients
Instructions
Notes

*If you are not a coconut fan, you may simply omit this ingredient. The same goes for the chopped nuts. Depending on what you add to the stuffing mixture and the precise size and number of apples used, you may end up with extra. Simply place any leftovers in a small zipper top bag and refrigerate for future use.

**When using raisins or cranberries, I like to sprinkle them around the base of the apples and allow them to absorb the cider mixture instead of mixing them with the oats.