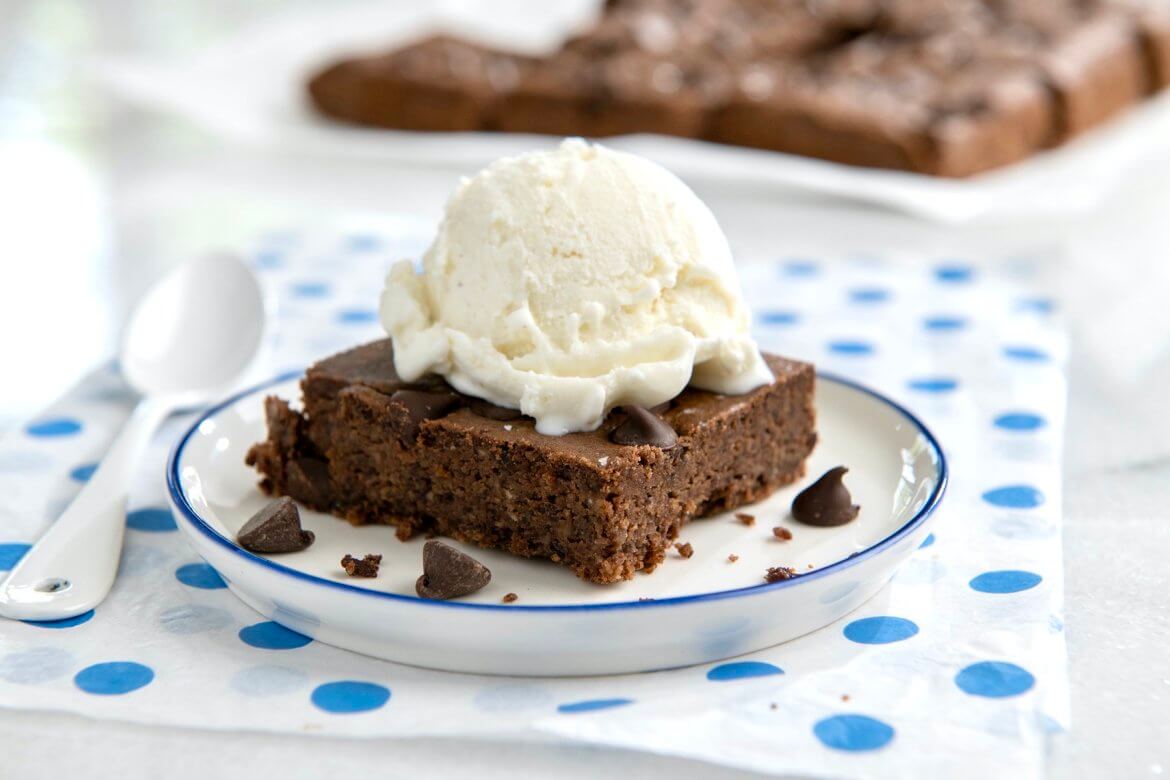 Decadent, fudgy brownies score big points in flavor and texture while delivering a filling dose of fiber and protein. A total dessert win!

“I love these brownies because you think they are going to be gross, but they are delicious and nutritious.”

Those words, from “Chef E.” age 9, sum up these brownies perfectly.

Let’s face it. If you’re going to “healthify” a widely popular recipe, it better taste good. Especially if it’s expected to hold its own against a classically decadent, fudgy, chocolate dessert.

So when Andrea Kapner, the founder of Tiny Turnips Kitchen, a New York City-based cooking school for kids, shared her recipe for a flourless brownie that delivered filling protein and fiber thanks to a can of black beans, I was not altogether sure I’d be able to share it with my readers. 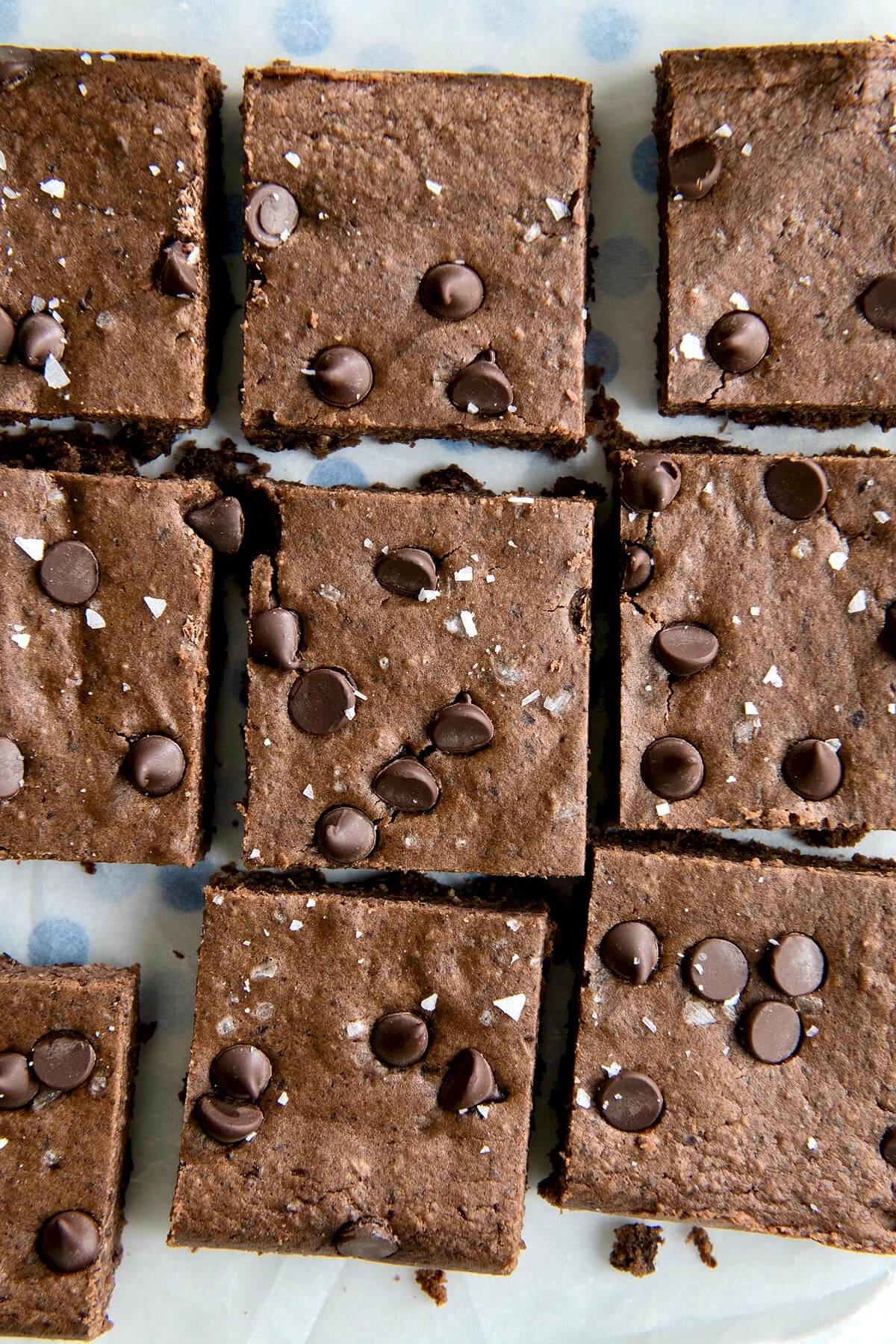 The taste and texture needed to pass the test with flying colors. Who wants a brownie that tastes like black beans, right?

That said, I know that beans have the power to shine in unsuspecting ways, adding creaminess and structure to a recipe with a flavor that can often be masked.

When Andrea mentioned that this recipe is a fan favorite among the children who have taken her cooking classes, I felt especially compelled to try. If kids who are often labeled as picky gobble up these brownies, perhaps we would enjoy them as well!

The first time I baked these, my nieces, ages 7 and 10, came to help. Every opinion mattered. (And as you can tell by their expressions, we had no fun.😉) 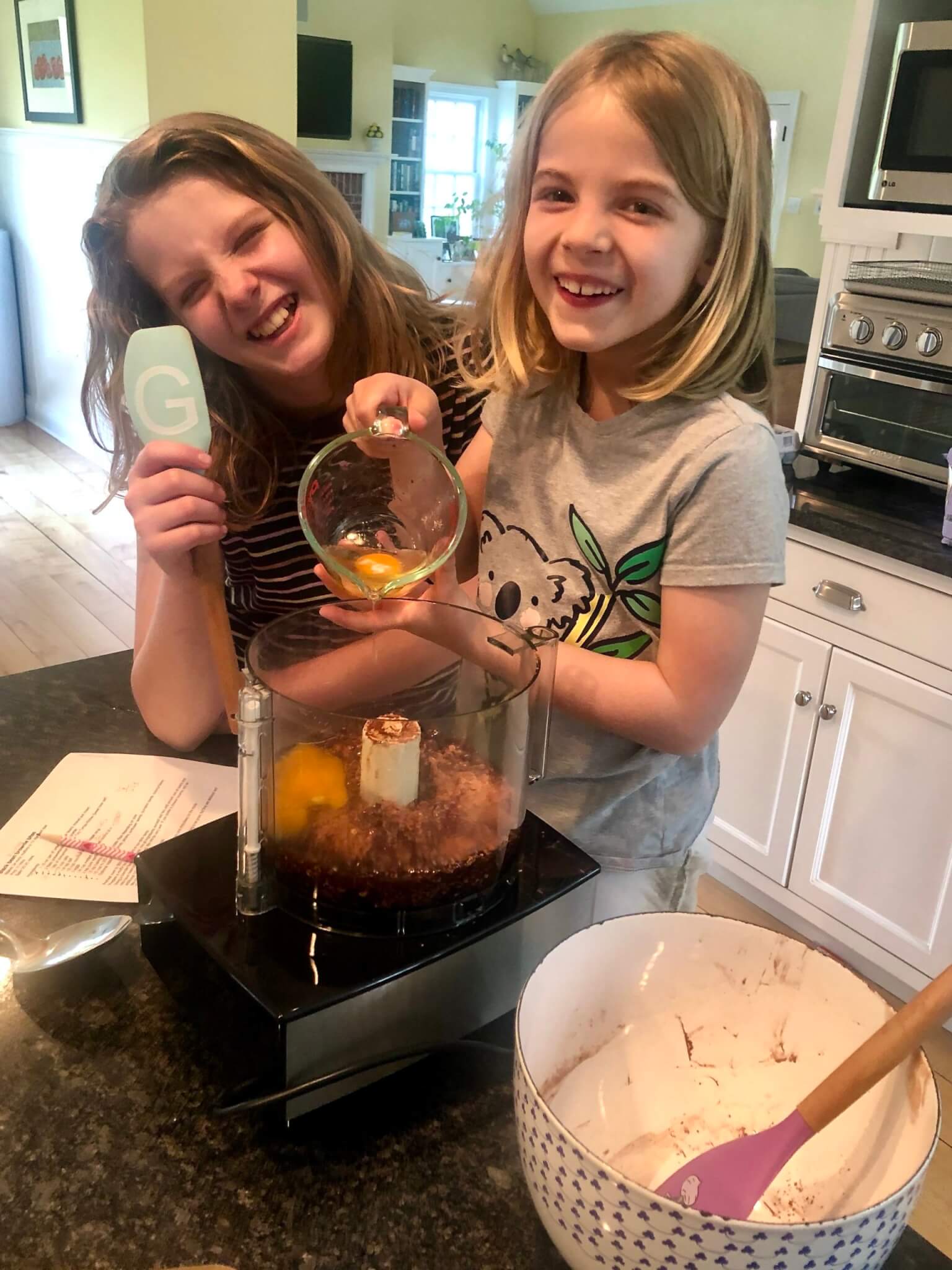 After we baked, their parents joined us for dinner, and the girls proudly served the brownies for dessert. We hadn’t kept any secrets－everyone was aware of the “mystery” ingredient.

As such, some were skeptical.

So, what was the consensus?

Everyone enjoyed the brownies.

The girls loved them. Several people commented that they weren’t as sweet as “normal” brownies but were still plenty sweet.

Everyone approved of the texture, which had just a hint of the classic brownie gooeyness in the center with somewhat crustier edges.

The only negative comment on that first batch came from one person who was sensitive to the cinnamon in the recipe. The original recipe called for one teaspoon of cinnamon, but the girls and I used half that amount, thinking that some people might not enjoy the presence of the earthy spice.

In future batches, I omitted the cinnamon entirely, and it is not included in the recipe below. You could add the smaller amount, if desired. Those who enjoy the combination of cinnamon and chocolate may also enjoy a pinch or two of cayenne pepper, a combination that is popular in Mexican cuisine.

For a hint of salty-sweet flavor and added visual appeal, I like to add an extra sprinkle of chocolate chips and a dusting of flaky sea salt to the top of the brownies. Simple as it is, the sea salt tends to garner lots of oohs and aahs! 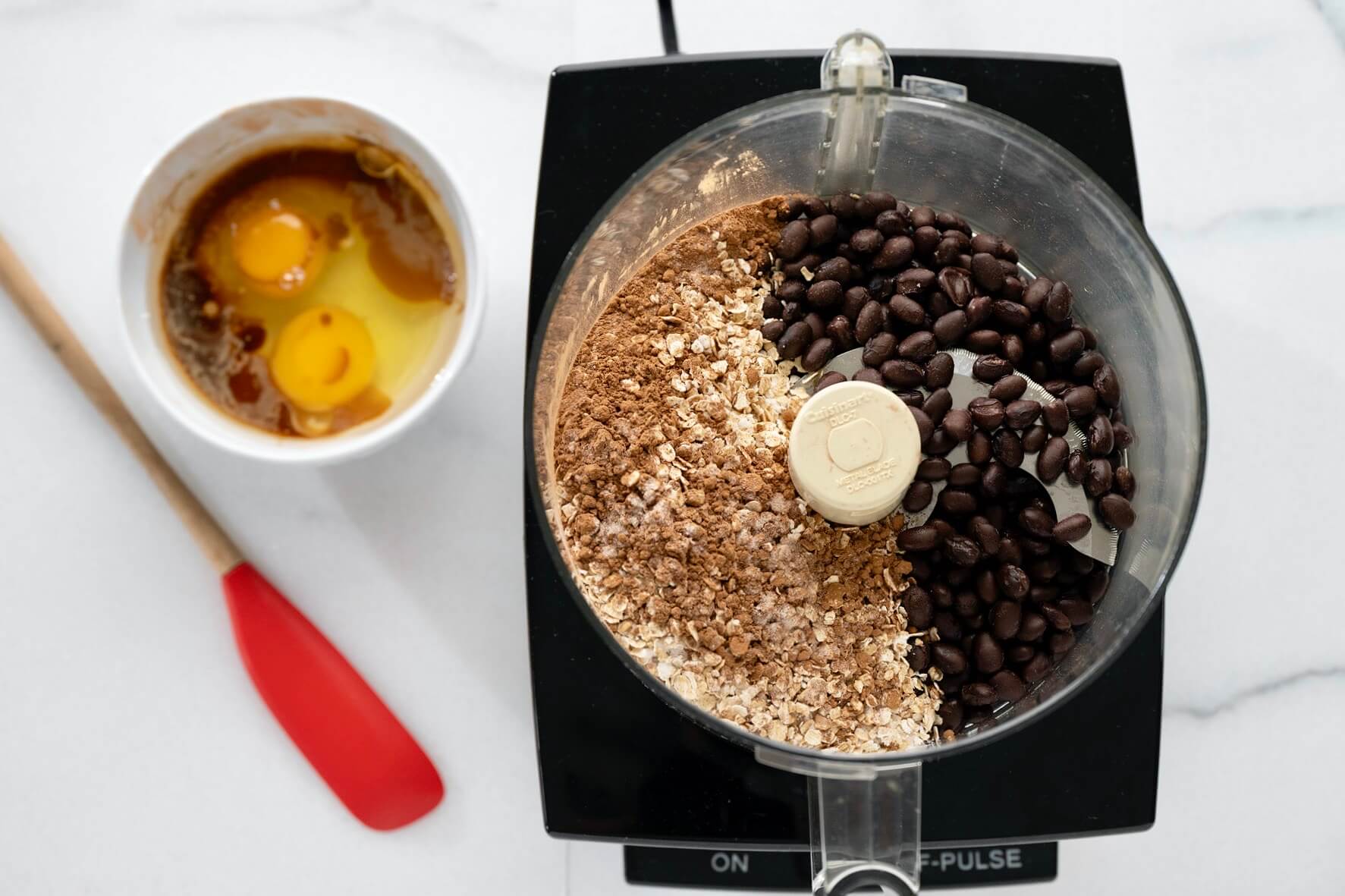 The recipe relies on pantry staples, making it an easy, go-to dessert. 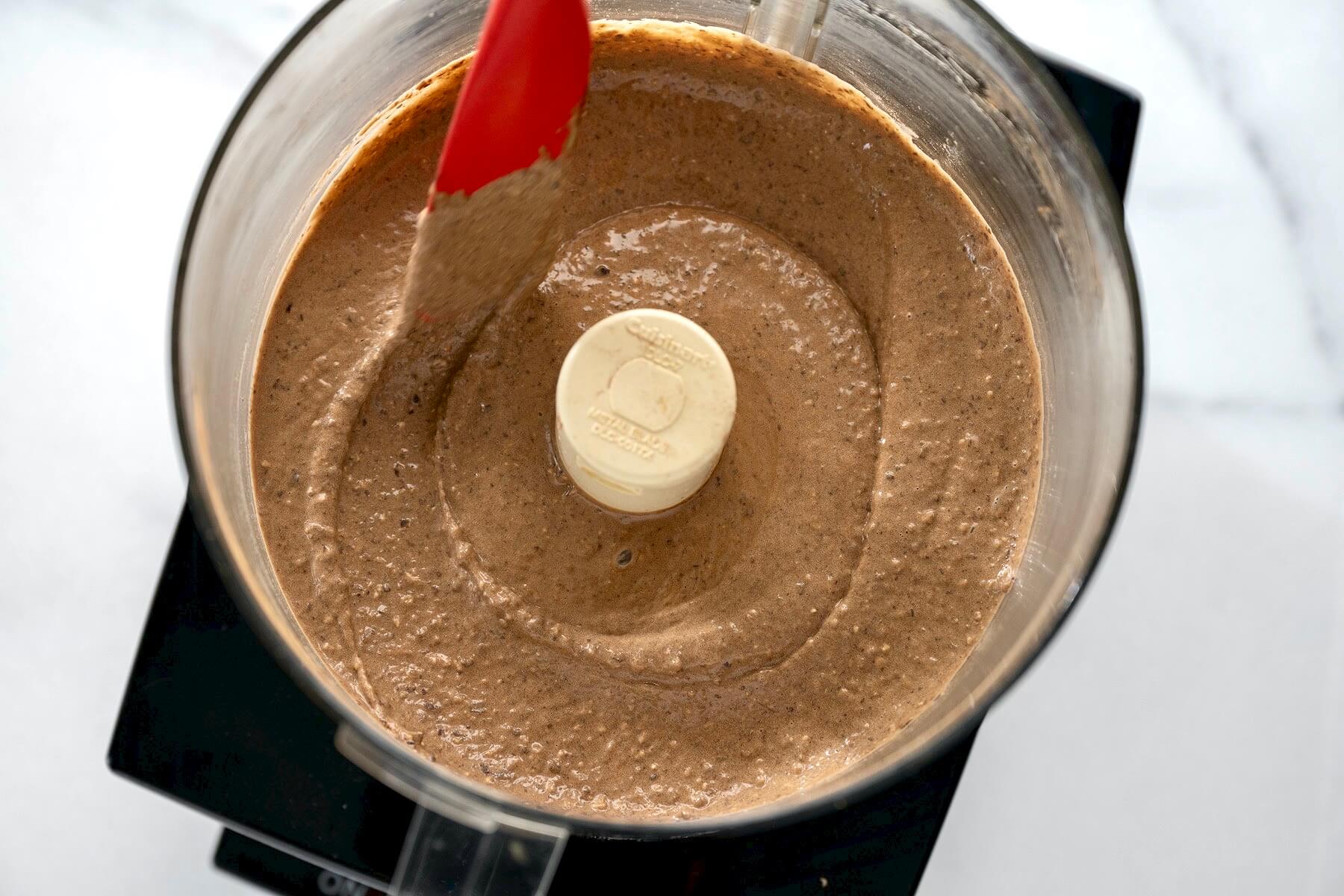 Process all the ingredients except the chocolate chips and optional add-ins until very smooth. You’ll see flecks of black from the beans, but you don’t want to see any chunks of beans or whole oats. 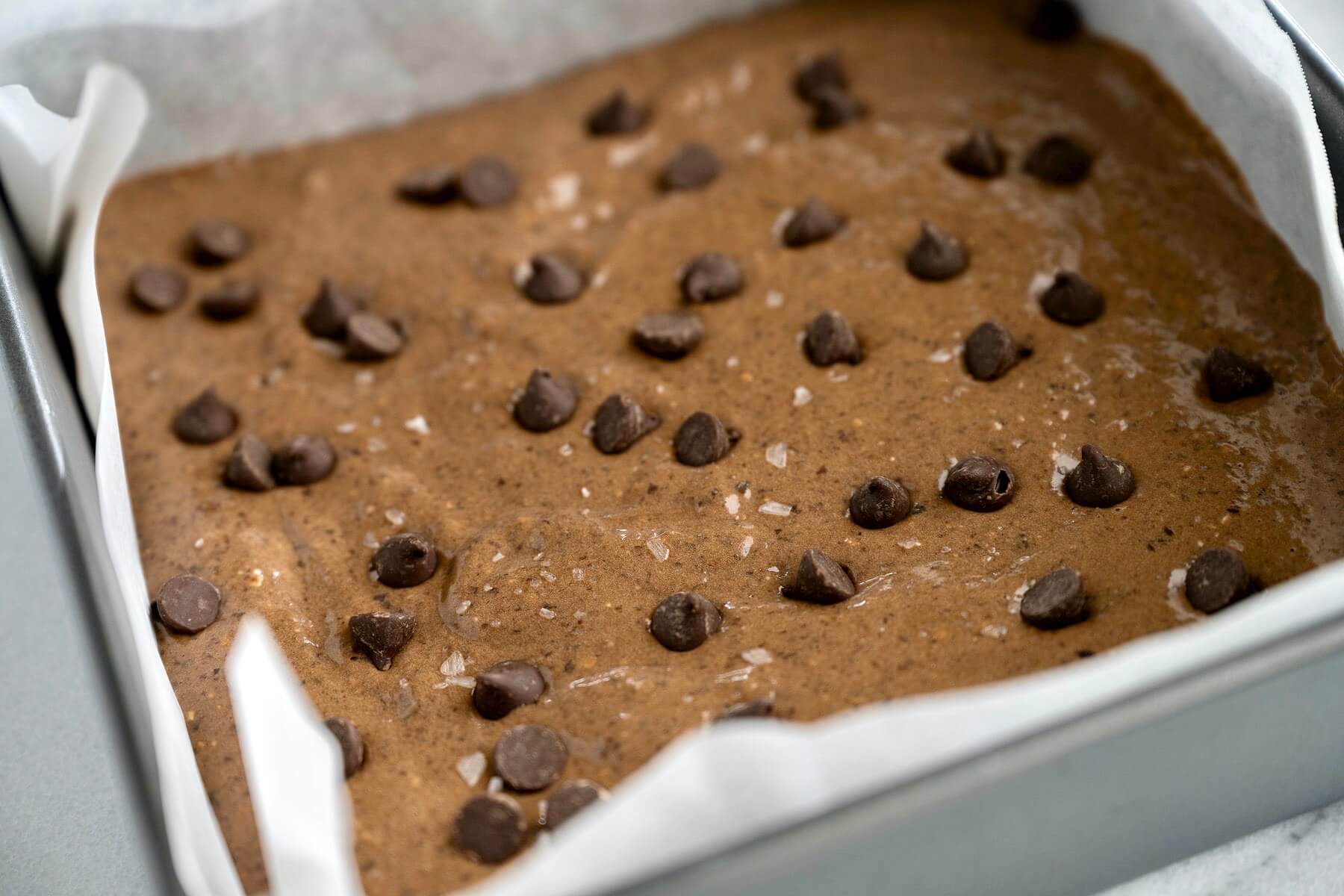 We like to top the brownies with an extra sprinkle of chocolate chips and flaky sea salt. When using the maple syrup, the batter will be thinner than with the sugar option. Accordingly, the recipe notes when to add the toppings to ensure they don’t sink. 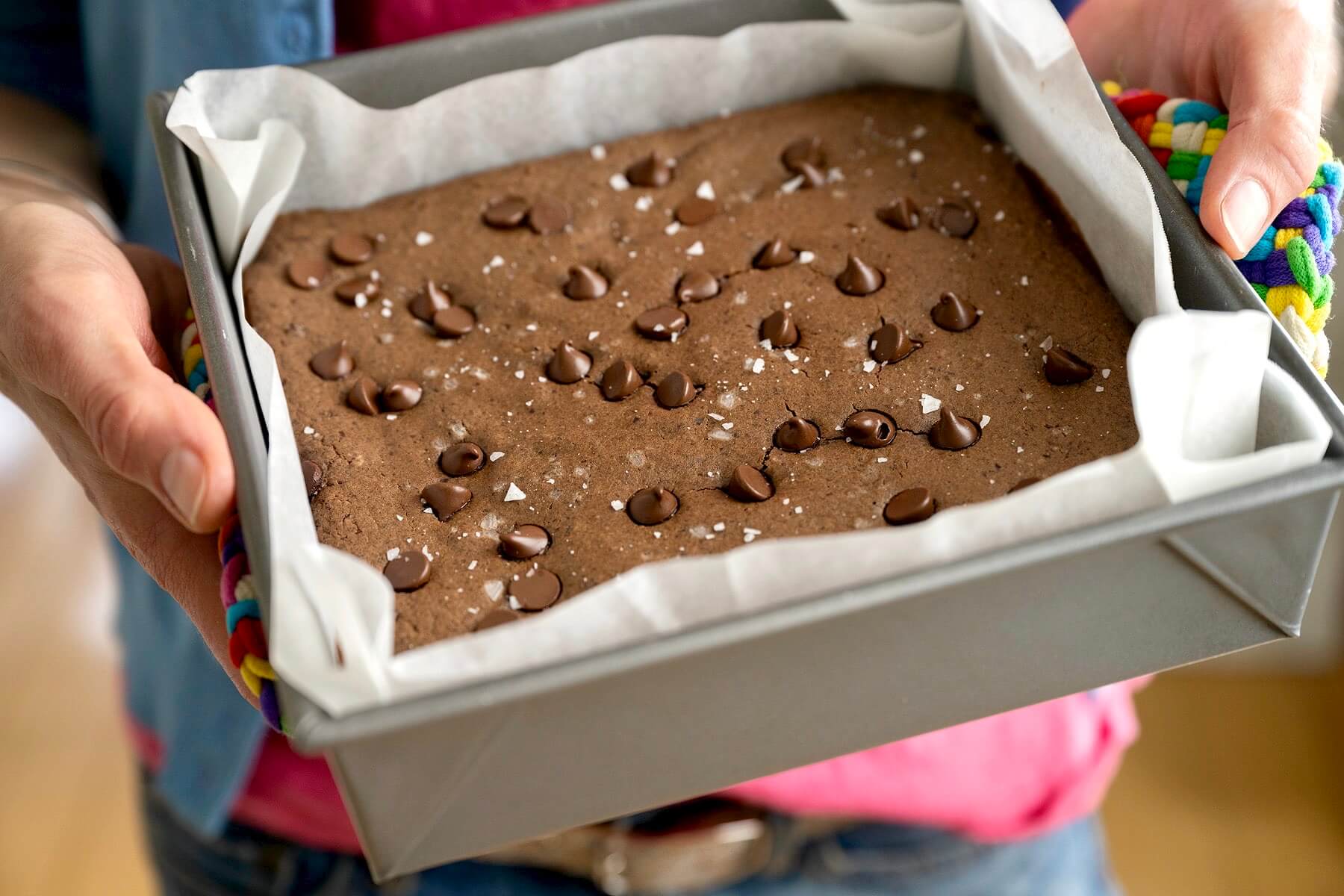 I like to line the pan with parchment paper so the finished brownies can be easily removed for cutting. The baking dish may be greased or sprayed instead. 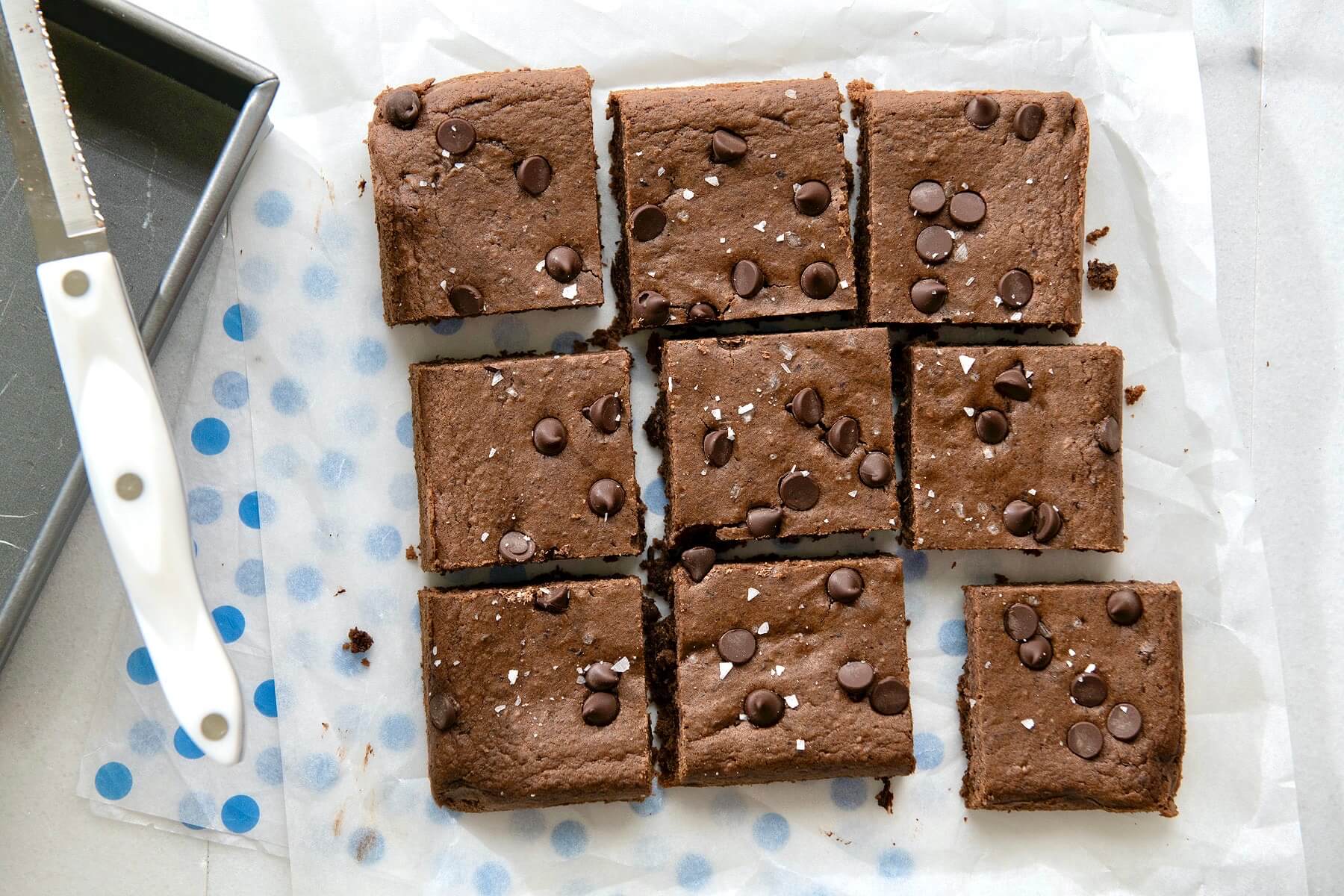 This batch is totally cooked through, but for a gooier, fudgier center, you may slightly undercook the brownies, as some like to do with traditional brownies. 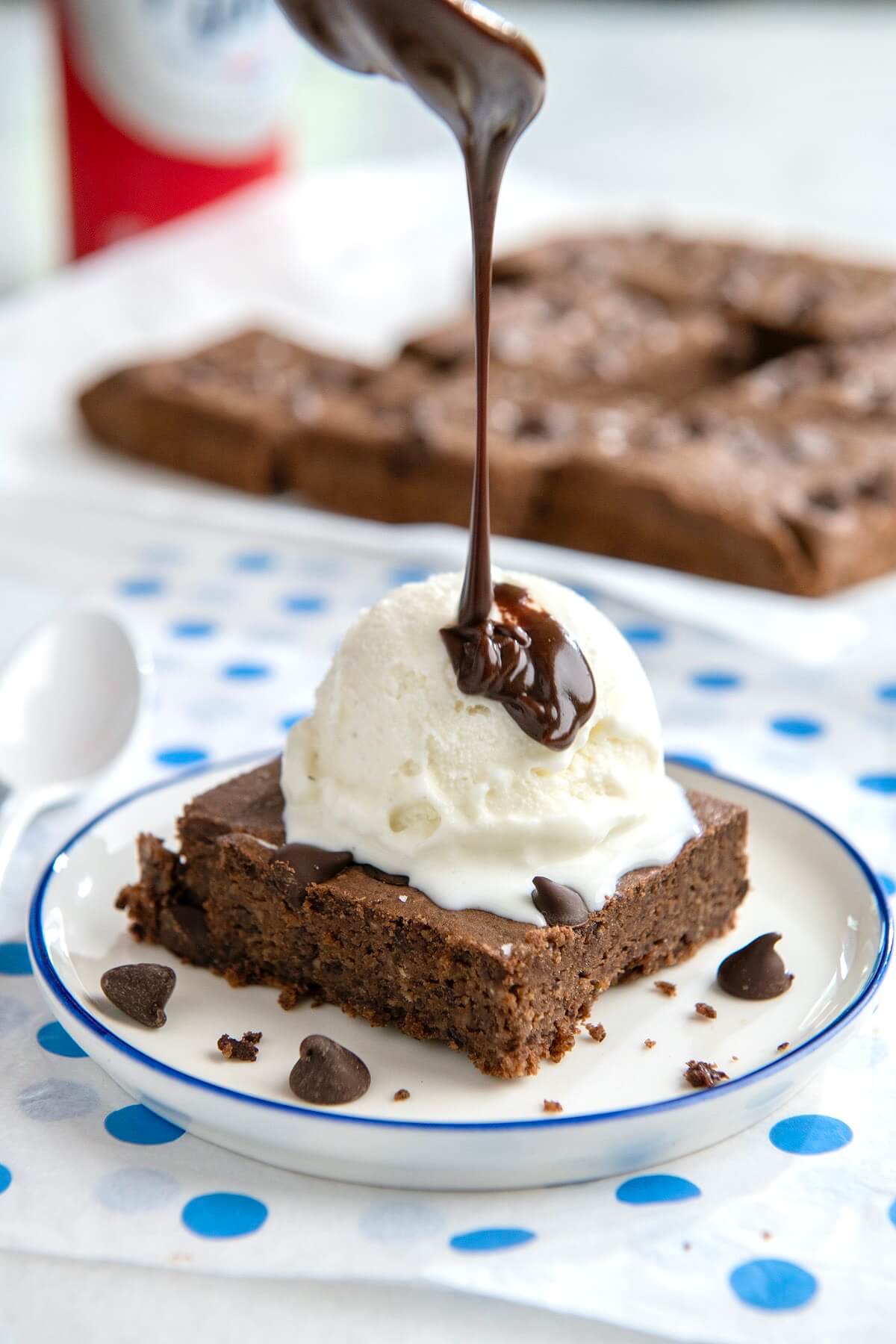 I’ve long been a fan of a good brownie sundae. A scoop of ice cream and a drizzle of Salted Hot Fudge Sauce is all you need!

Through Tiny Turnips Kitchen, Andrea offers cooking classes and birthday parties for children (with Zoom options), as well as meal planning services and some fun products like the monogrammed spatulas. (My niece, Grace, is holding hers in one of the previous photos.) Additional details can be found on the website, and please let us know in the comment section, below, if you make the brownies! 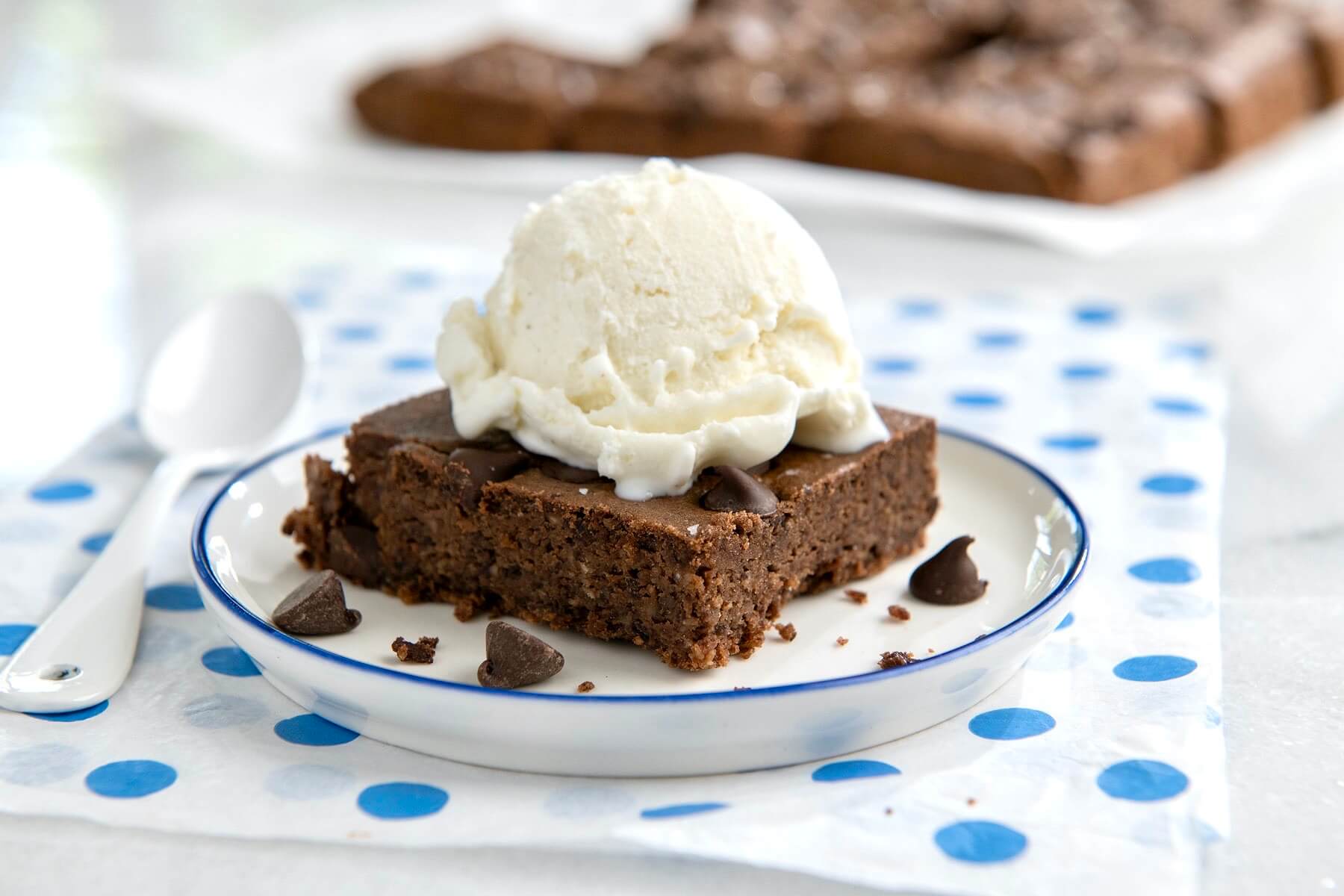 Preheat the oven to 350℉. Grease or spray a 8×8-inch baking pan or line it with parchment paper, creasing along all the corners to better sit in the pan.

Add all the ingredients, except the chocolate chips and optional mix-ins/toppings, to a food processor. Process until the beans and oats have been fully incorporated and the mixture is very smooth, scraping down the sides as needed. (You will see flecks of black from the beans, and that is fine. Note that the mixture will be fairly thin when using maple syrup.)

Stir in the chocolate chips and optional nuts or coconut, but do not process at this point. Transfer the batter to the prepared pan.

If using sugar: at this point, I like to scatter a handful of chocolate chips over the uncooked brownies and then lightly sprinkle with flaky sea salt.
If using maple syrup: I wait to scatter additional chips and optional sea salt until after baking because the topping will sink into the thinner batter as it bakes. In this case, sprinkle the salt and chips on the brownies as soon at you remove them from the oven and let sit for a minute or so. After the chips have rested on the hot brownies, very gently push on them to make sure they adhere.

Bake for 20 minutes, give or take several minutes depending on oven and type of baking pan used. (Dark-coated pans cook more quickly than light-colored pans.) The edges should be firm and the center should be just cooked through.

Cool thoroughly and enjoy. Cover and store at room temperature for several days or refrigerate for up to a week. The brownies freeze well, too.

* I slightly prefer the texture of these brownies with maple syrup, but both options are delicious. When making them with granulated sugar, I add an extra 2 tablespoons to more closely match the flavor of the syrup version.

For 12 standard size or 24 mini muffins: Prepare muffin tin with liners or nonstick spray. Fill the cups ¾ full. Bake standard muffins for 20-25 minutes and mini muffins for about 13 minutes, checking a little early and allowing for an extra minute or two as needed.