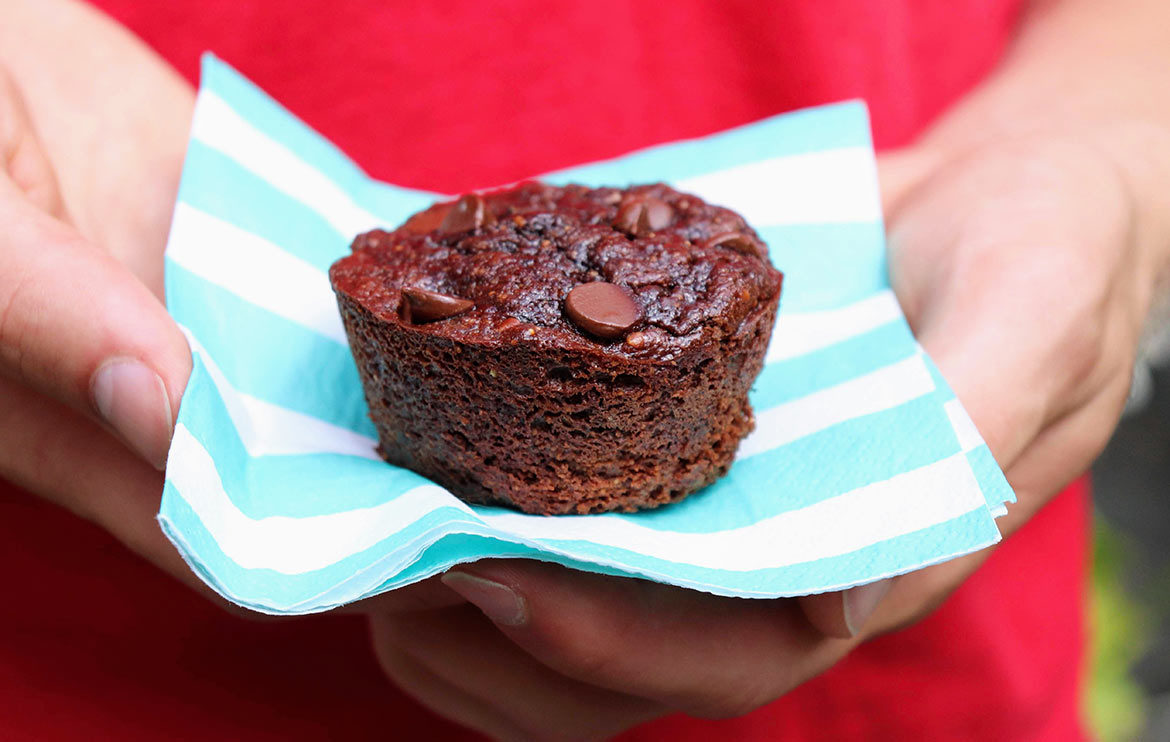 Muffins that are healthy enough to eat for breakfast yet decadent enough for dessert — Flourless Chocolate Zucchini Muffins fit the bill.  Plus they’re naturally gluten- and grain-free, use minimal sweetener, and freeze well!

A recent train ride to New York City seemed like an ideal opportunity to write about the merits of today’s recipe.  Deep in thought, three hours would surely pass quickly and I’d arrive in the Big Apple with a feeling of accomplishment.

Perhaps my brain was already in vacation mode, because the crossword puzzle and magazine I tucked in my bag seemed a bit more captivating than knocking out a rough draft.  Eventually, it occurred to me that my travel companions might be a worthy source of inspiration.

As luck would have it, my son and his friend, who were seated one row behind me, had both enjoyed the following recipe for chocolate zucchini muffins several times.  Thinking the teenage perspective could be far more intriguing than anything I might muster up, I asked them to jot down their thoughts on both zucchini, in general, and the following recipe, which incorporates the seasonal vegetable.

Under the zucchini column, comments like “fun to grow” and ”looks funny” followed by “tastes bad” and “tastes good” made it quickly apparent that these two teenagers did not share the same set of taste buds.

“Great on the go. I ate one in the car on the way to school.”

“Delicious way to start the morning and a filling snack.”

If the latter set of reactions had been as divided as the first, I may have reconsidered today’s recipe! I have, however, made many batches of these muffins over the years, and they consistently receive high marks.  In fact, the very first time I made these, my younger son asked what inspired me to serve brownies for breakfast. 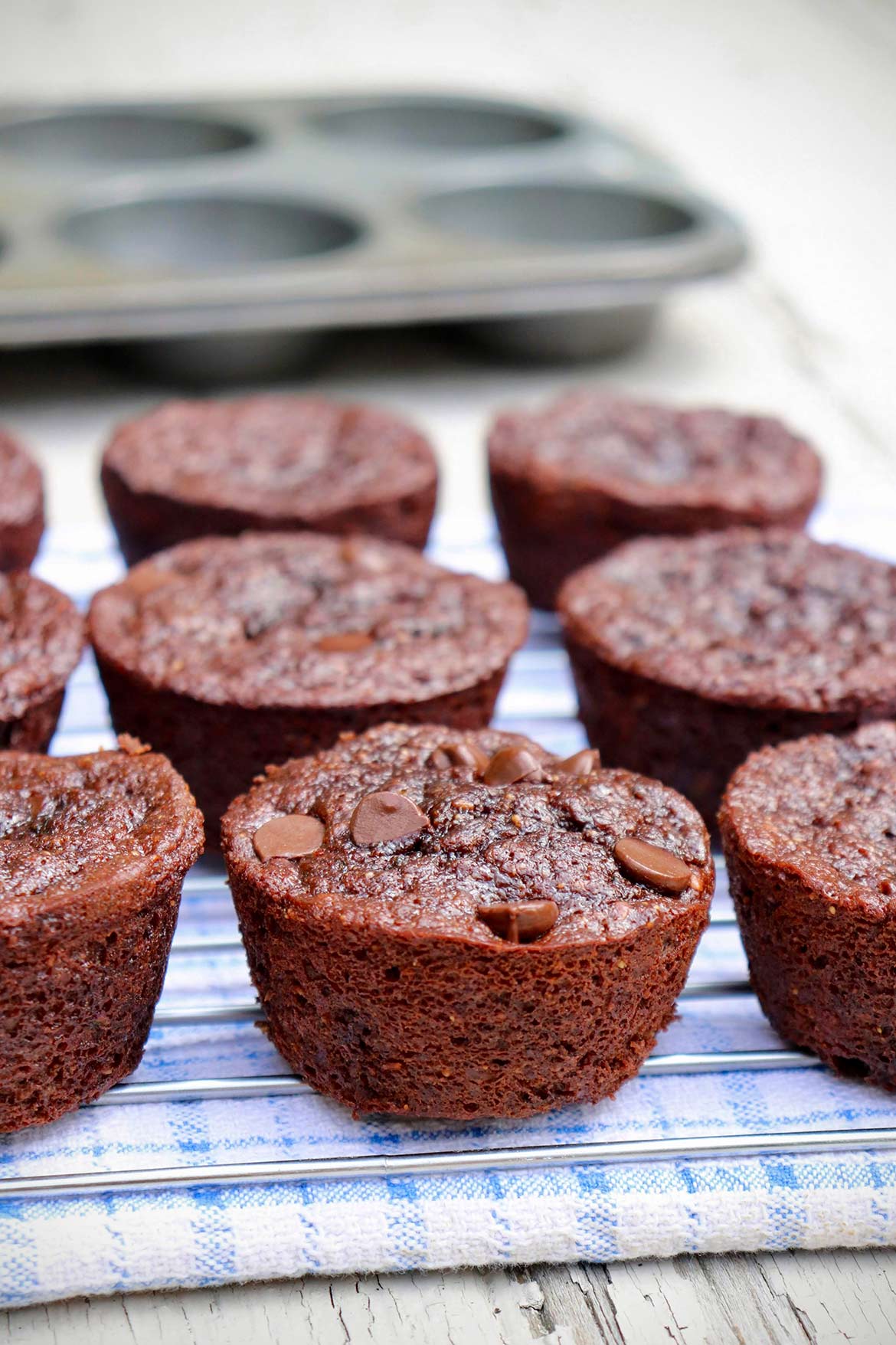 The creation is a marriage of time-tested recipes for chocolate zucchini bread and chocolate chip pumpkin muffins, which came to fruition when I lacked the almond flour required in former but had the almond butter called for in the latter.  Cocoa powder supplies the deep chocolate flavor plus good-for-you antioxidants with just enough sweetener to balance its natural bitterness.  The remaining ingredients ratchet up the health appeal a few more notches, but no one ever seems the wiser.

Interestingly, the ingredients in these muffins make them naturally gluten-free, and one of my teenaged helpers happens to have a gluten allergy.  However, neither the gluten-eater nor the gluten-avoider made references such as “good for a gluten-free muffin” or “slightly dry”—attributes that are often associated with gluten-free baked goods. 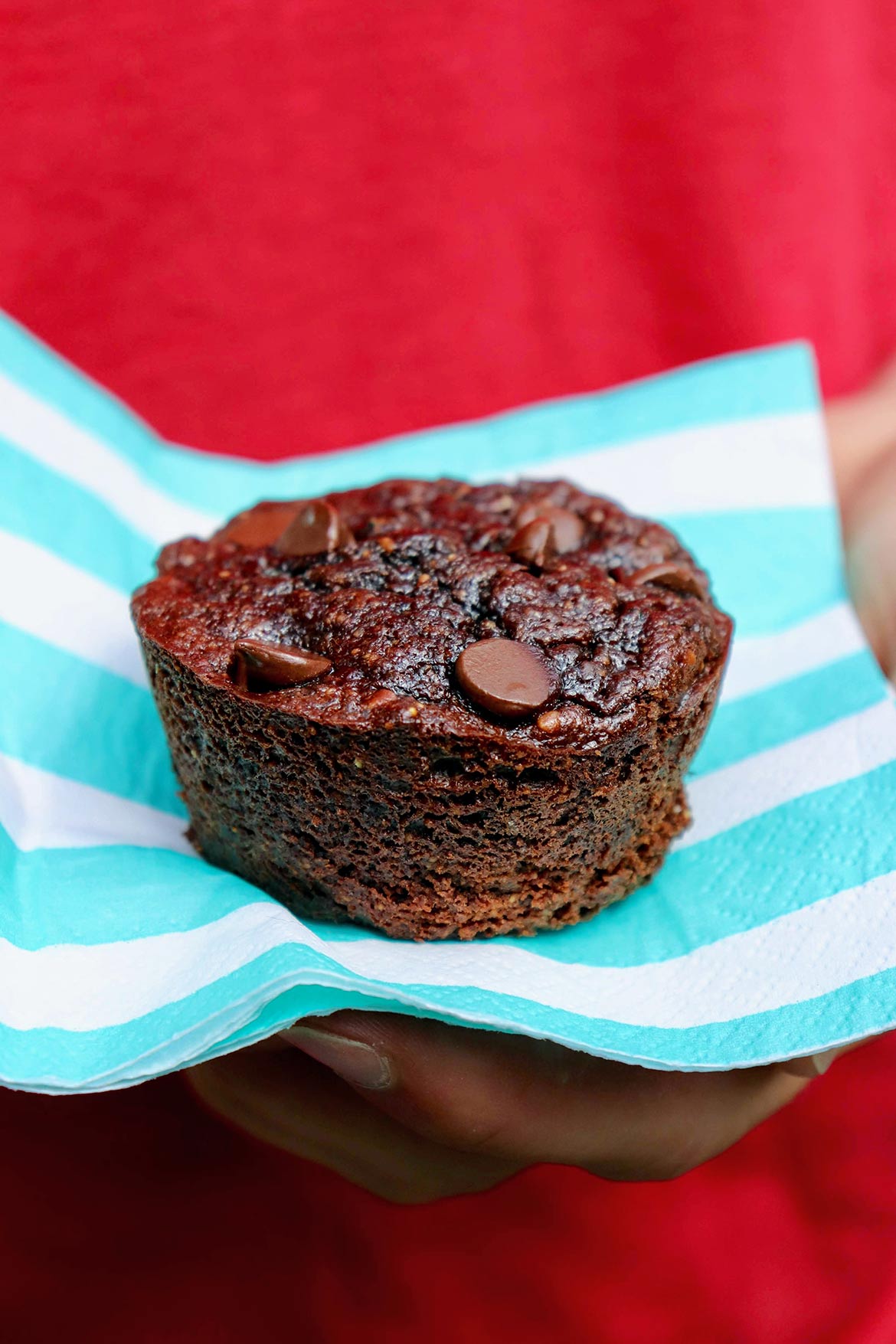 On the contrary, further questioning revealed that what they most like about this wholesome treat is the rich chocolaty taste and the fact that there’s no hint of dryness, even when several days old.  I appreciate the muffins’ supply of filling protein, healthy fats, and all-natural sweetener, save a small amount of chocolate chips.  Those who are dairy-free can also enjoy these muffins by choosing an appropriate non-dairy chocolate chip, like the Enjoy Life brand.

When the summertime supply of zucchini seems endless, I like to bake a few extra batches, as they freeze well.  While my family typically eats the muffins for an easy breakfast or snack, I occasionally enjoy one for a satisfying dessert as well. 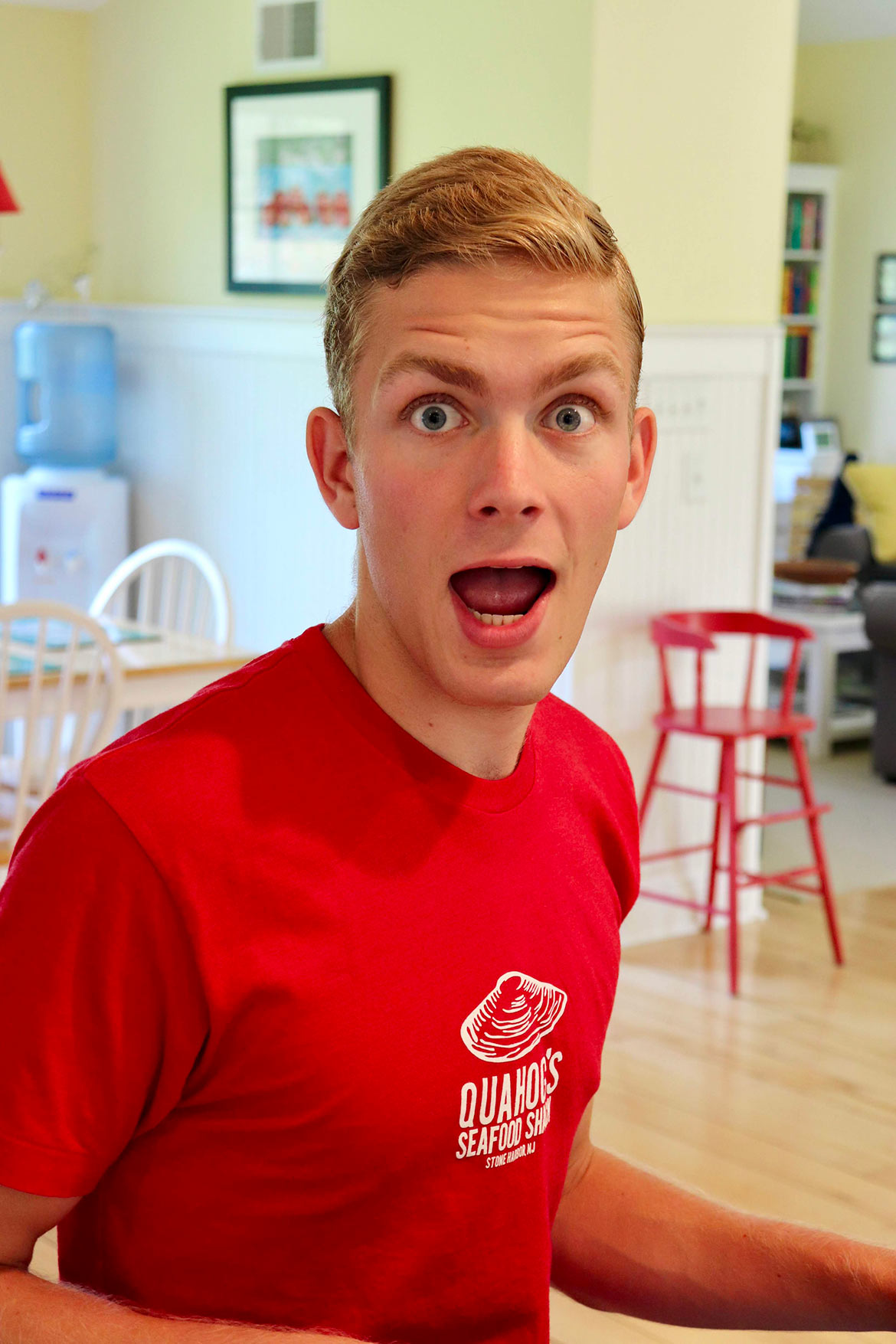 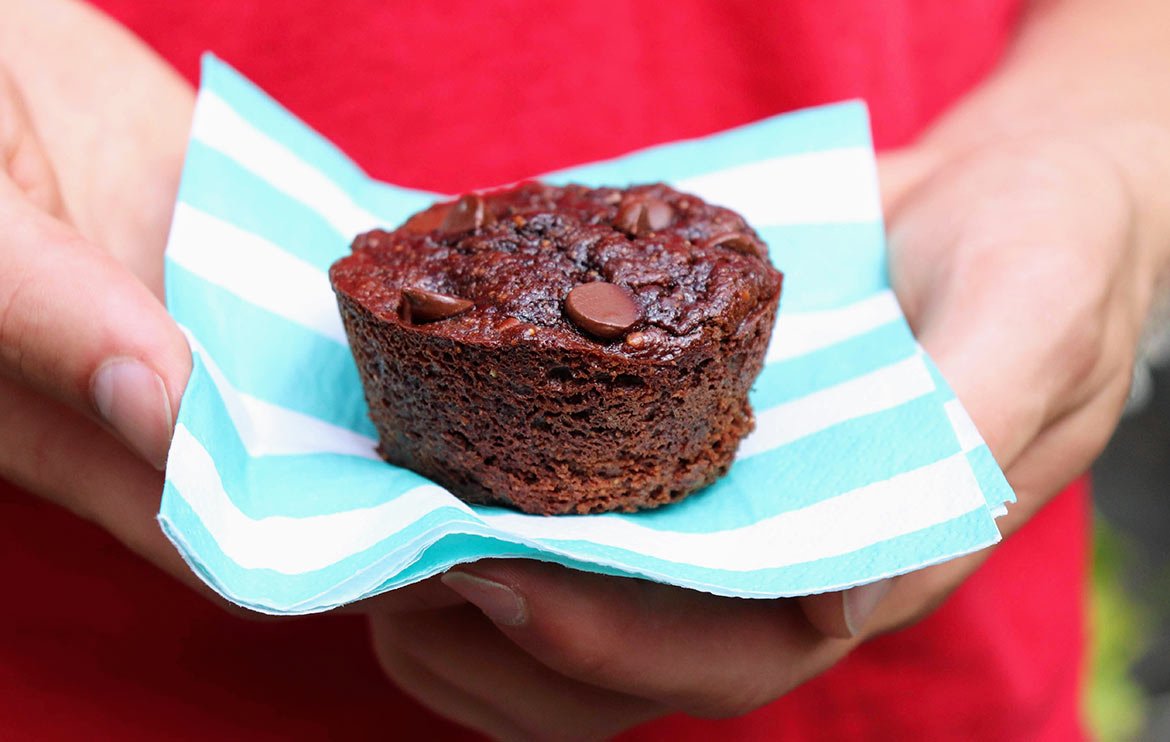 Flourless Chocolate Zucchini Muffins
Yield: 9 muffins
Thanks to their rich chocolate flavor and tender crumb, these grain-free muffins satisfy like a brownie but are healthy enough to eat for breakfast!
Print
Ingredients
Instructions

Preheat the oven to 350 degrees F, and prepare a muffin pan by spraying nine of the cups with cooking spray. Set aside.

In a mixing bowl, stir together the mashed banana and the almond butter until smooth.  Stir in the egg and remaining ingredients, ending with the zucchini.  Stir in the chocolate chips.

Distribute the batter among the prepared muffin cups.  Bake for 15-20 minutes, until the tops of your muffins are just set and a toothpick inserted into the middle comes out clean.  (These take 18 minutes in my oven.)  Allow the muffins to cool in pan for 10 minutes before removing.  (It’s helpful to run a knife around the edges to loosen and gently pry the muffins out.)  Store in an airtight container at room temperature for 3-5 days or up to a week in the fridge.  These muffins freeze well, too.

*I prefer almond butter in this recipe for its relatively neutral flavor, although peanut butter would work, too.  Sunflower seed butter could be used for those with a nut allergy.  When nut and seed butters are stored in the refrigerator, it helps to bring them to room temperature before using to make them easier to stir into the batter.

**For quick and thorough moisture removal, I like to wring out the shredded zucchini in a clean tea towel (and then pull apart what becomes a clump) before stirring into the batter.

***The chocolate chips can be considered optional, although they make these muffins tastes especially brownie-like.  For the most impact with the fewest chips, I often dot 6-8 chips over the muffins before baking instead of stirring the noted 1/4 cup into the batter.  That way, you get a hint of chocolate in each bite with a modest amount of added calories and sugar.

Tip: For an accurate measurement of the cocoa powder, fluff it up, spoon into the measuring cup, and then level off with the straight edge of a knife—as is recommended when measuring all-purpose flour.  Scooping into the powder compacts it, resulting in a greater amount being used, which can in turn lead to a less sweet end result, since cocoa powder is inherently bitter.  Optionally, a kitchen scale allows for quick and easy measuring and spot-on accuracy.