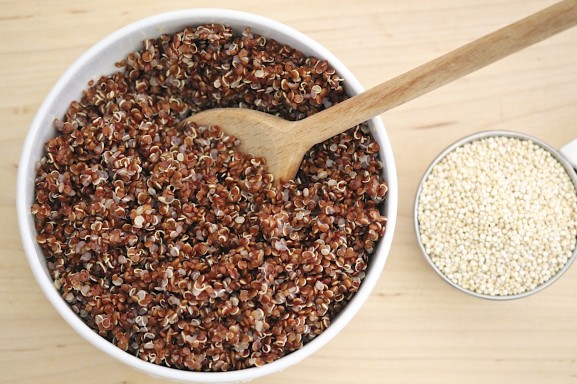 My vegetarian sister first introduced me to quinoa (pronounced Keen’-wah) some twenty years ago when this little known superfood was relegated to health food store shelves. Popular with vegetarians because it is a complete protein that is also rich in iron, calcium, phosphorus, magnesium, and fiber, this pantry staple is finding widespread fame thanks to its nutty flavor and ease of preparation.

Quinoa is an ancient grain (well, technically it’s a seed but it is used like other whole grains) that was first cultivated by the Incas.  In addition to its superfood qualities, quinoa is naturally gluten-free.

Most quinoa recipes call for 15 to 20 minutes of cooking.  Most recipes also call for a two-to-one ratio of liquid to quinoa.  In my experience, these instructions often create an end result that is a bit mushy, so I do it a little differently.

In general, I have found that many grains benefit from less water or broth than typically called for in package or recipe directions.  This applies to quinoa and millet as well as brown and white rice.  I call it “starving” the grain.  Like pasta, these grains will continue to absorb water long after it is required to produce a good outcome.  Anyone who has made soup with these ingredients knows that, if there are leftovers, there is often far less broth remaining after sitting in the refrigerator overnight!

A few details on quinoa based on questions I often hear:

Do you have a favorite quinoa recipe?  One of my new favorites is coming soon, and some of the following are recipes you might enjoy trying: 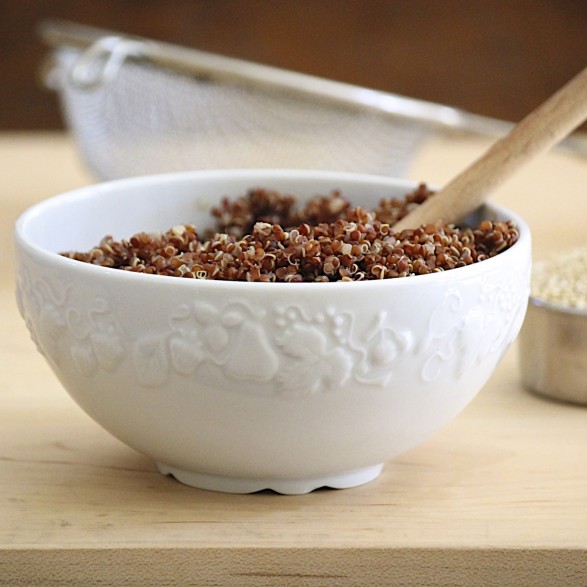 Perfectly Cooked Quinoa
Perfectly cooked quinoa can be used as a base for delicious salads, breakfast porridges, pilafs – even baked goods and egg dishes. If cooking with broth instead of water, you may omit the salt. I tend to stick with water when preparing salads where a dressing is added or when making a sweet or fruity recipe. A little oil or butter is a nice touch but may be omitted if you choose.
Print
Ingredients
Instructions
Notes

•One cup of dried quinoa yields about 3½ cups cooked.

•If all of the water has been absorbed and the quinoa is still not tender, add an additional ¼ cup or so of water and continue cooking. This can happen if the lid seal is not tight or a slightly rounded cup of quinoa was used.

•To impart a toasted flavor, you may first sauté the rinsed and very well drained quinoa over medium heat. Cook, stirring constantly, for about 5 minutes or until the liquid has evaporated and you begin to smell a nutty aroma. When toasting, check the final cooking time several minutes early; in this method, the quinoa is already in the pot when the water is added and brought to a boil, so it cooks slightly faster. This method enhances the quinoa’s nutty flavor but, in the interest of time, I often skip this step and the quinoa still turns out beautifully.

•To quickly cool the cooked quinoa for use in salads, spread it on a baking sheet and refrigerate, uncovered, until cool. This also helps remove any excess moisture and separate the grains.