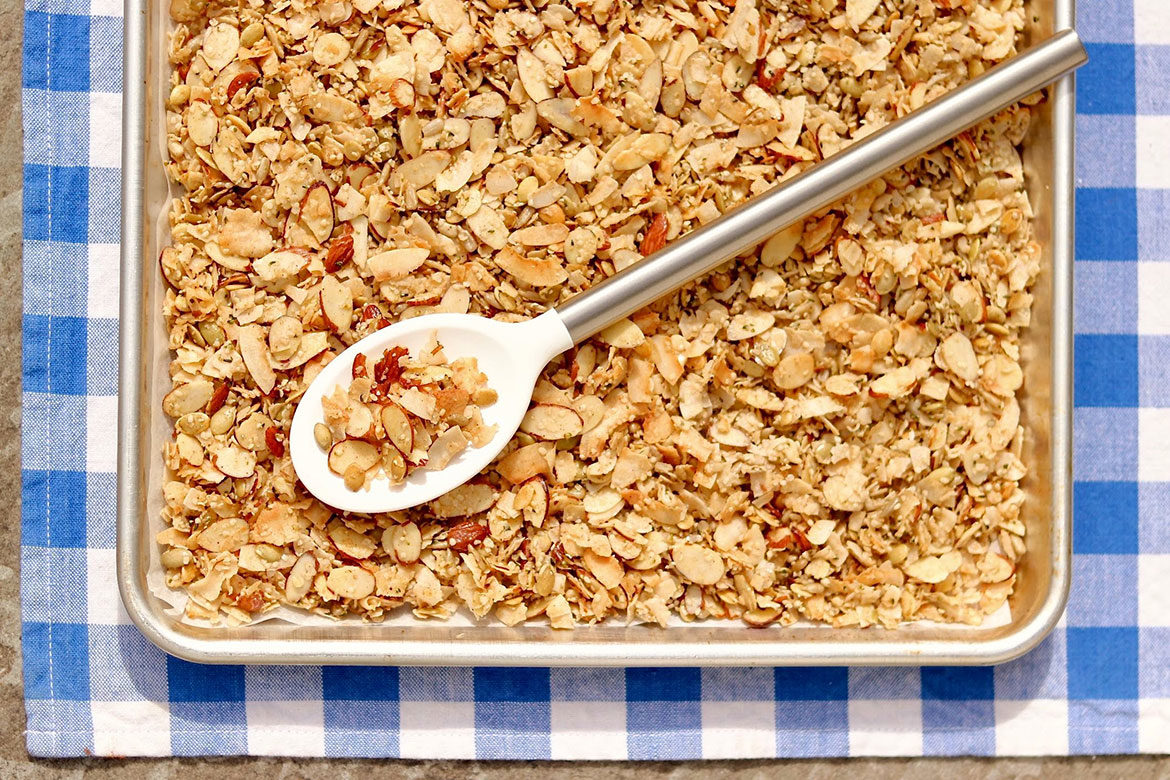 My favorite grain-free granola is lightly spiced and naturally sweet without being sticky like many Paleo granolas. The recipe also offers savings over expensive store-bought alternatives and convenient choices based on what you may have on hand.

This recipe was inspired by my Aunt Peggy, who first brought me a jar of her favorite Paleo granola when were were cookie baking the holiday season before last. She wanted to share, but more importantly, she wanted an opinion.

When mixing the ingredients for said batch, she inadvertently added garam masala instead of cinnamon. She had recently purchased the former to make Easy Slow Cooker Tikka Masala－and the colors are rather similar!

More on the spice mixup later. For now, suffice it to say that I enjoyed the granola very much, and over time have made a few adjustments to Aunt Peggy’s original recipe to achieve a balance of flavor and ingredients that suited us perfectly.

Aunt Peggy, for one, enjoys sprinkling this grain-free granola over plain Greek yogurt and appreciates how its sweet crunch balances the tart, creamy yogurt. I’ve used the mix－which unlike traditional formulations, does not include oats－on overnight oatmeal and yogurt bowls among other things. And when I’m craving a little something sweet and crunchy, I find a handful to be quite satisfying.

Chock-full of nutrient-dense nuts and seeds and warm spices, the recipe is easy to adapt. I mention several possible substitutes within the recipe, but feel free to further adjust. Simply keep size and quantity in proportion. For example, if you don’t have sunflower seeds on hand, try using an equal amount of finely chopped raw cashews, or experiment with slivered almonds instead of sliced. Though you could add dried fruit, Aunt Peggy pointed out that there’s a welcome simplicity to keeping it plain. 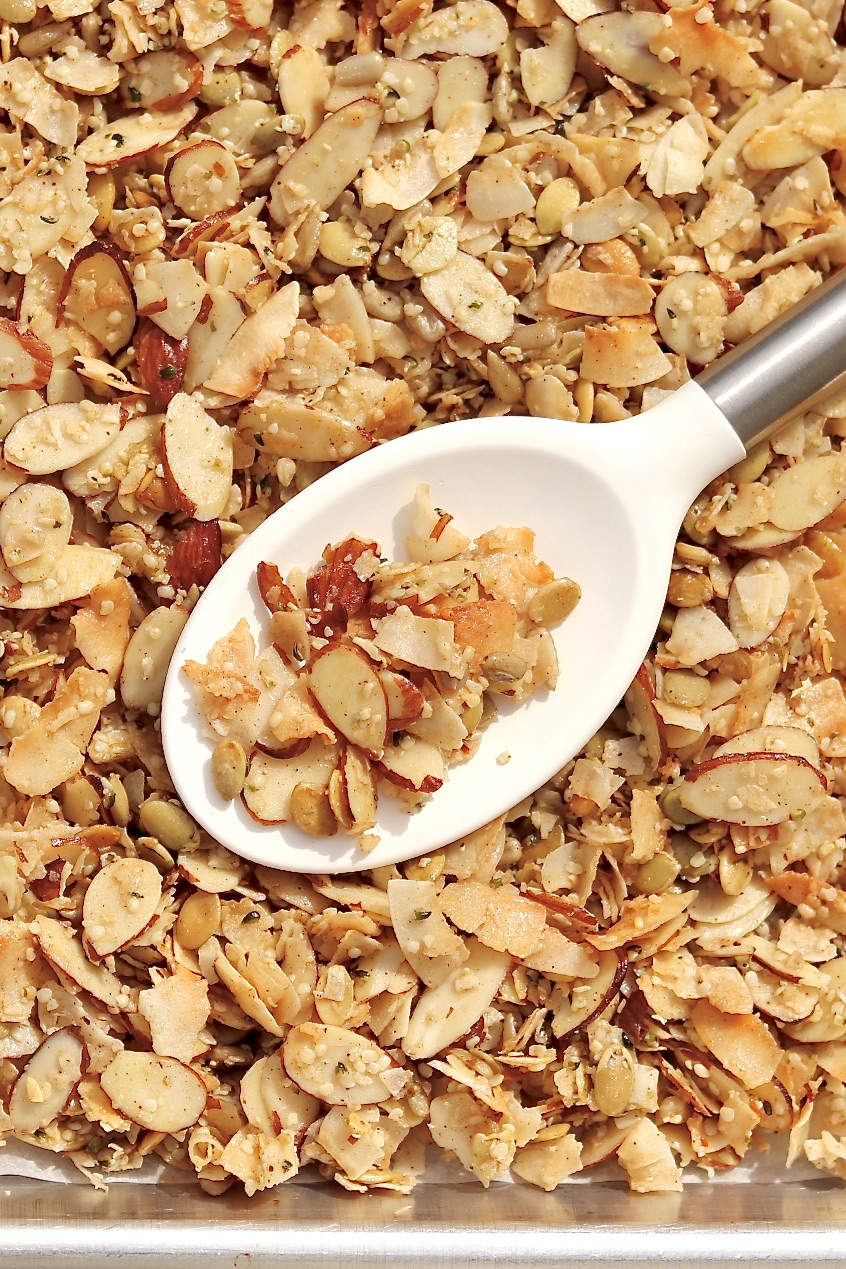 So what came of the accidental garam masala infusion? Aunt Peggy’s spice mix-up actually had a very happy ending. Garam masala, which is a blend of ground spices used extensively in Indian cuisine, translates to “warm spices”; it contains cinnamon, coriander, cumin, cardamom, cloves, black pepper and nutmeg, many of which we bake with regularly and some of which are called for in this recipe. The small amount of spices that we more commonly add to savory recipes here in the United States actually provided a subtle yet appealing kick. It worked－and I wouldn’t hesitate to add a small amount to other baked goods like banana and zucchini bread.

I mention this in case you feel compelled to experiment, for a little “je ne sais quoi,” as my mother-in-law would say. She uses this French phrase when referring positively to a quality that’s hard to identify but adds interest and complexity. A little something special.😊

Feel free, of course, to stick with the more traditional spices called for in the recipe. Either way, it provides another option in the delicious world of granola!

More granola recipes you may enjoy: 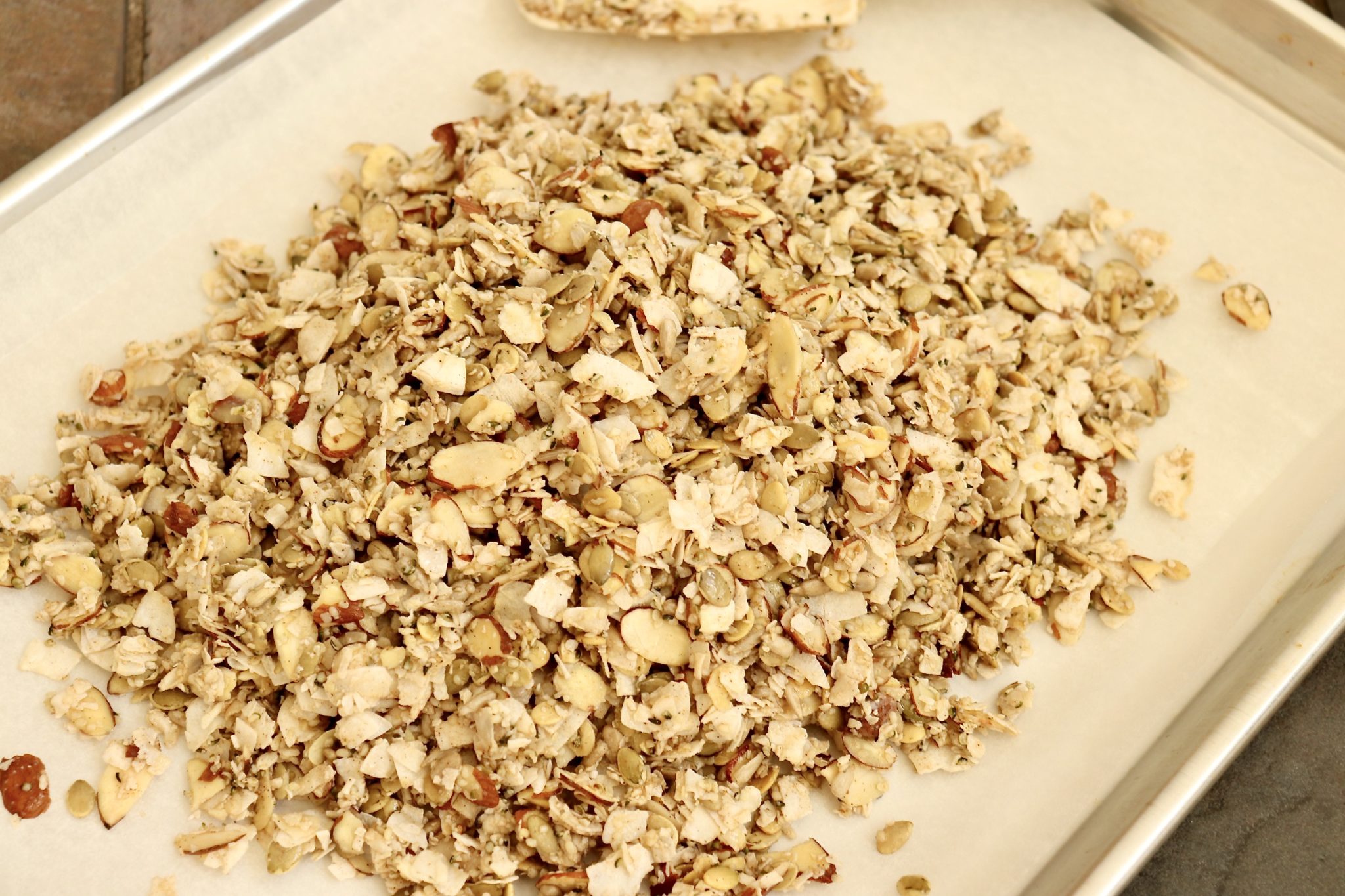 Food on the outside of a baking sheet browns quicker than what’s in the center because ovens are hotter closer to the walls. So after I transfer the uncooked granola to a baking (as shown), I push slightly more of the mixture towards the outside of the pan. Thicker edges around the perimeter will help everything cook more evenly. Also, lining the baking sheet with parchment paper, while not a must, makes it easier to later pour the cooked and cooled granola into a container for storage. 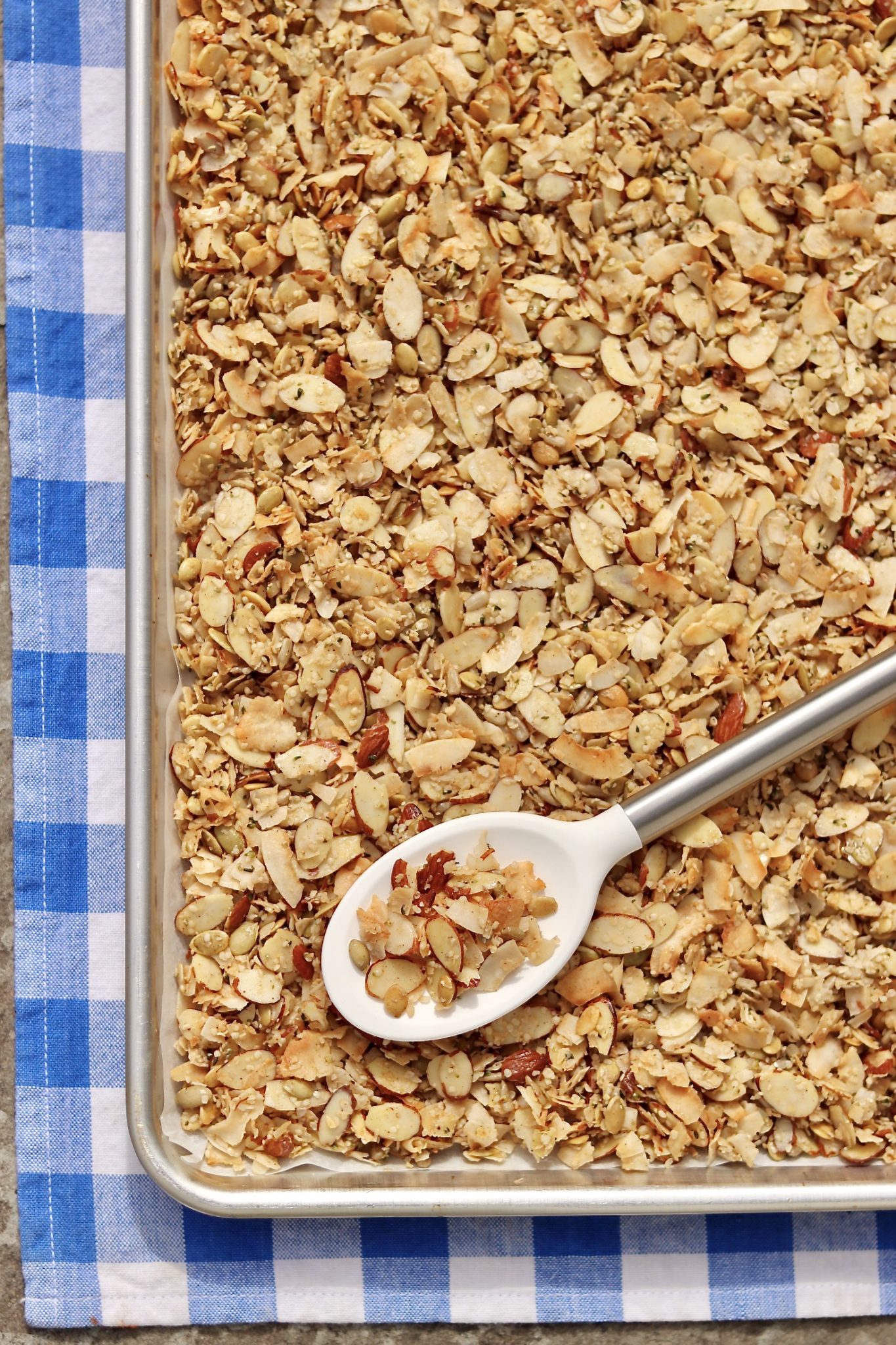 I like this recipe because it isn’t sticky like many Paleo granolas. It’s loose – like Lolita’s Low Sugar Granola – and has a hint of chewiness thanks to the flaked coconut. With its caramel-like undertones, the use of pure maple syrup provides a lovely natural sweetness for those who enjoy. 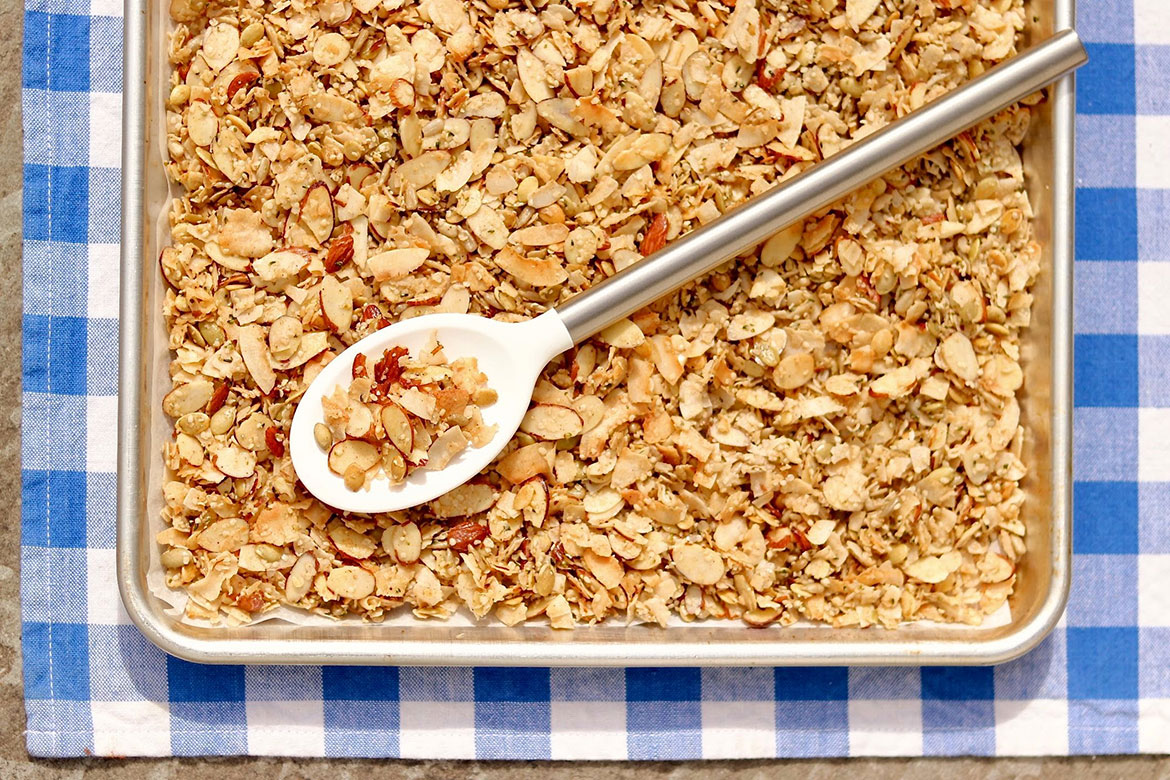 Paleo Granola
Yield: approximately 7 cups
This grain-free granola offers the perfect balance of chewy and crunchy with appealing sweetness and spice. (Plus it's not sticky like many Paleo granolas!)
Print
Ingredients
Instructions

Preheat the oven to 300°F. Line a large, rimmed baking sheet (18×13-inches or half sheet pan) with parchment paper.

Combine the maple syrup, melted coconut oil and vanilla in a small bowl, and then pour over the coconut mixture and stir well to evenly coat. Spread the mixture evenly over the prepared baking sheet** and bake for 25 minutes, stirring once halfway through. At this point, if the mixture is not lightly golden and mostly dry, stir again and bake for 5 more minutes. The granola will continue to crisp as it cools.

*My Aunt Peggy once used garam masala by mistake when making this recipe. Upon realizing, she added the cinnamon but omitted the cardamom. I tasted that batch and we both decided that the garam masala added something special, so feel free to try if feeling adventurous!

**Tip: Because food on the outside of a baking sheet browns quicker than what’s in the center, I push slightly more of the mixture towards the outside of the pan. Slightly thicker edges help everything to cook more evenly.