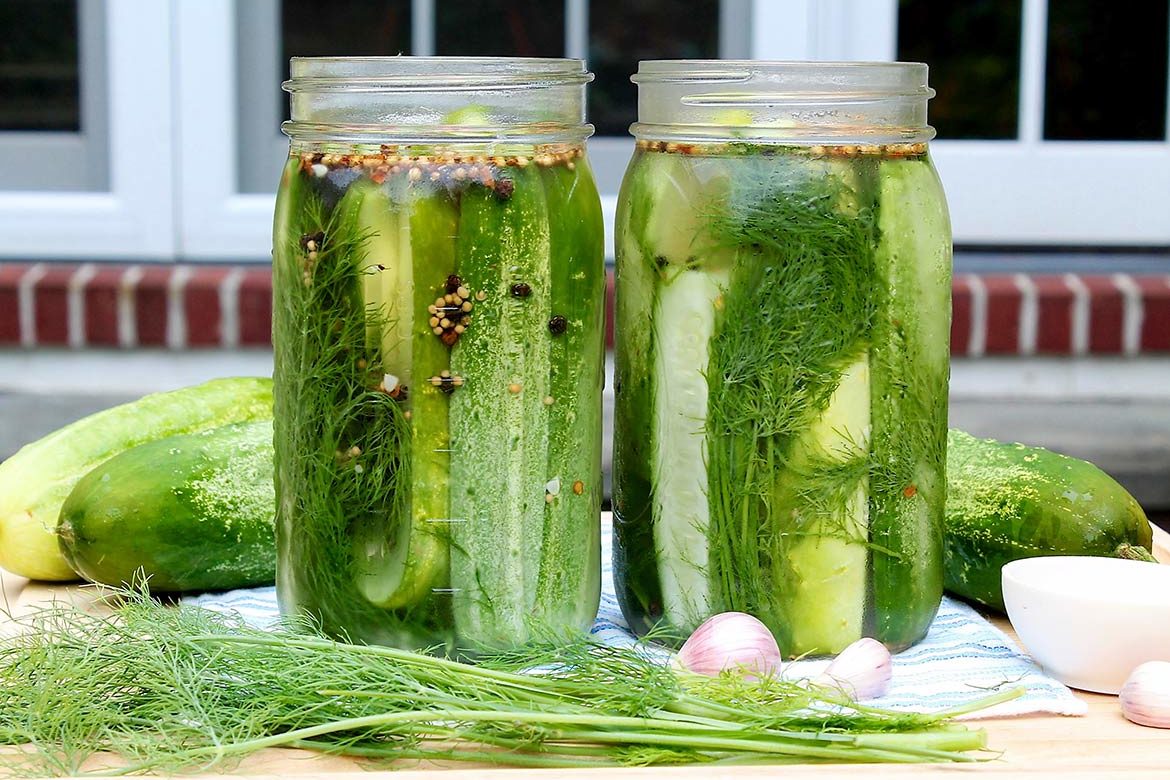 No canner is needed for these crisp, tangy Refrigerator Dill Pickles, and once the spices are assembled, they come together easily…and might just become a new summertime favorite!

Have you heard that Cleopatra thought eating pickles made her beautiful?  Or that Christopher Columbus rationed pickles during his famous voyage in order to prevent his sailors from getting scurvy?  And then there are the generations of pregnant women who are said to have enjoyed these brined snacks with a side of ice cream! 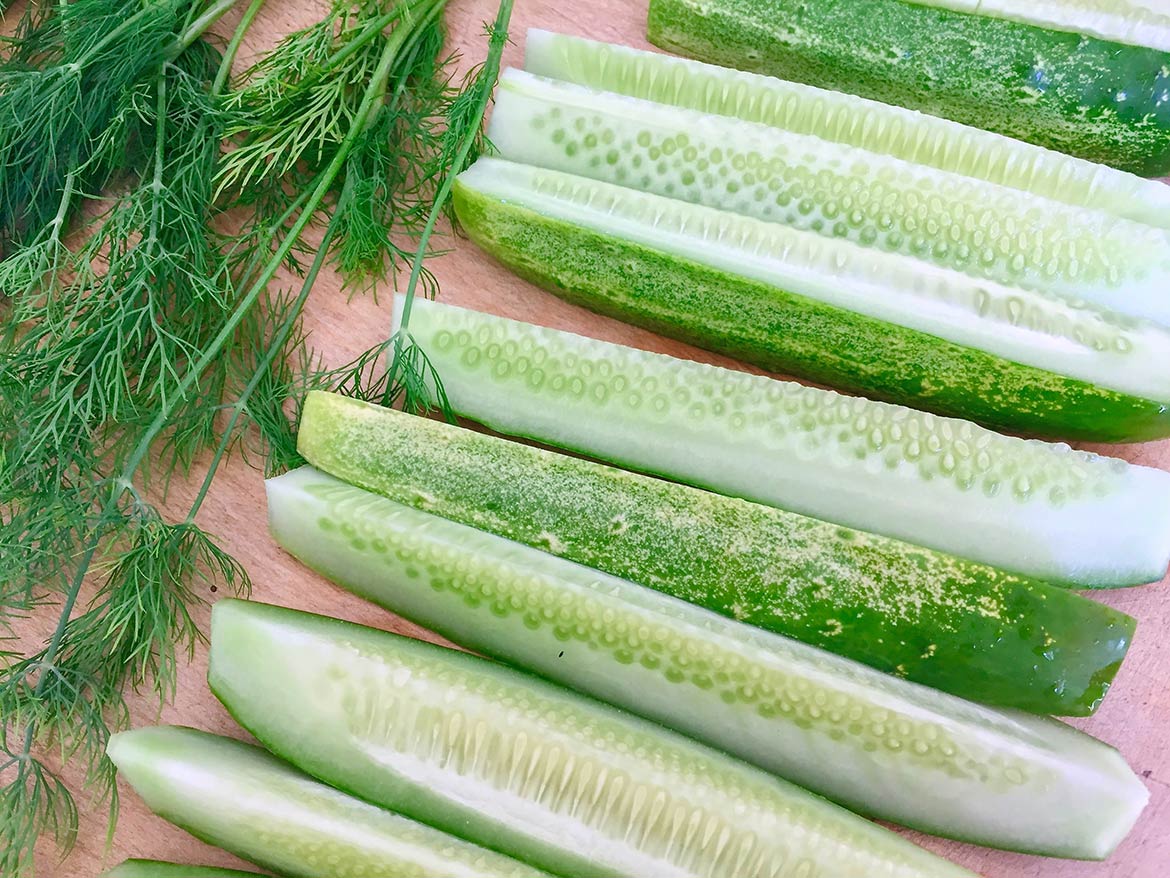 While pickles have a compelling past, the current generation of creative minds is clearly adding to the story.  Kool-Aid pickles, for example, have apparently become all the rage with kids in Mississippi.

The concept is simple. Take some prepared dill pickles and soak them in really strong Kool-Aid for a week or more. The sweet and sour snacks are said to sell out at fairs and delis, and at upwards of a dollar a spear, the margin of profit seems pretty good.

When I first heard about this vibrantly hued “treat,” I did a little reconnaissance work to make sure it wasn’t a joke.  Sure enough, recipes for Kool-Aid pickles do exist and are often referred to as “Koolickles.”

Further investigation revealed earlier methods of creating a sweet and sour pickle, including poking a peppermint stick in the middle, where it would dissolve and produce the desired flavor.  Some imaginative souls were said to dip the dill spears directly into Kool-Aid powder.

I have yet to plunge the following pickles into brightly colored punch, but over several years of refining my recipe, I discovered the merits of steeping them in a different solution.  A simple overnight soak in salted water ensures pickles with maximum crunch and flavor, as it removes excess water from the cucumbers before pickling. 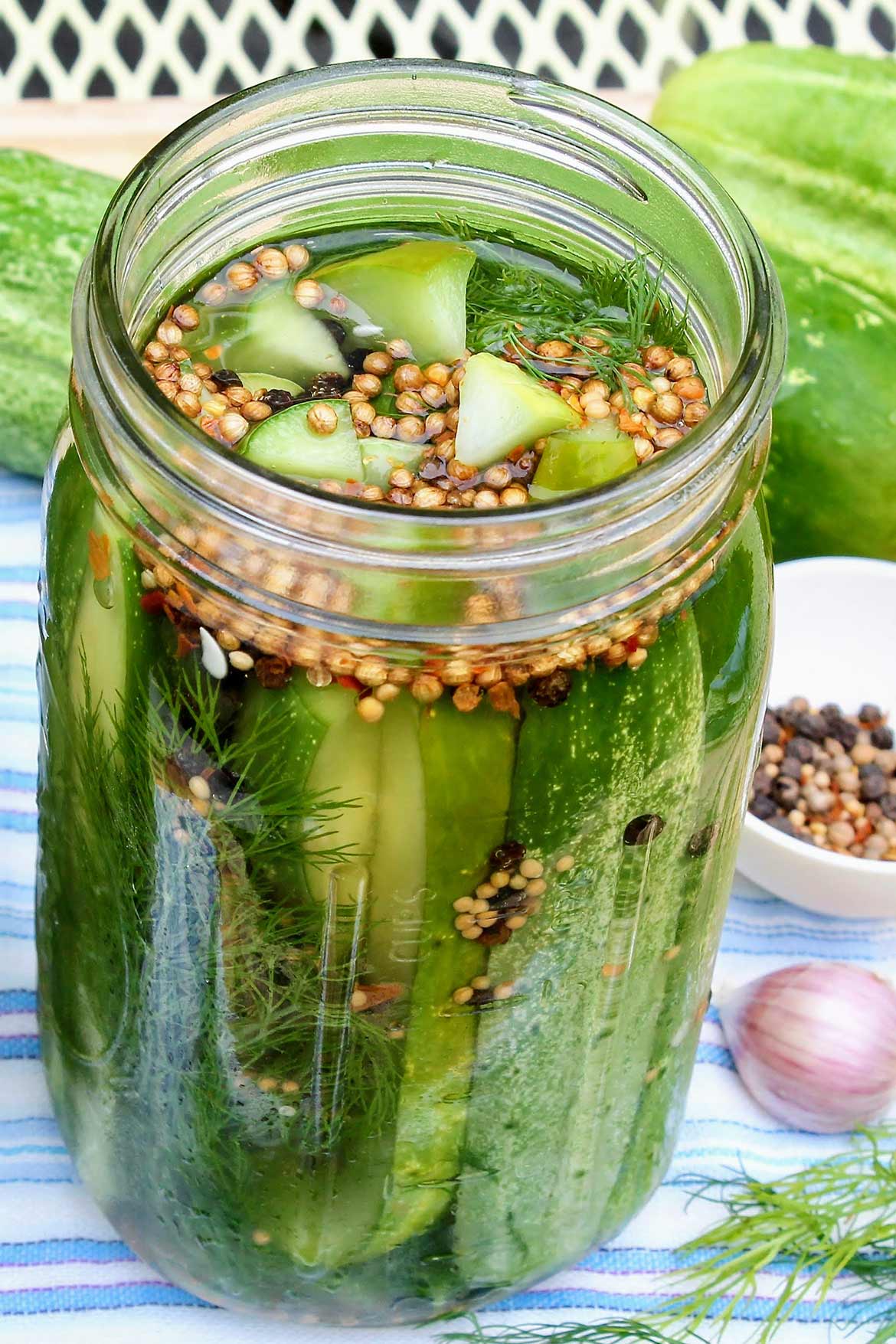 As I fiddled with the various flavorings in the recipe over time, a few friends and self-proclaimed dill pickle connoisseurs graciously served as taste-testers. The final brining step (followed by a side-by-side taste test) deemed the recipe complete.  My generous sister-in-law, Christine, provided a steady supply of cucumbers from her prolific plants and deserves special thanks!

No canning is involved with this recipe, and the pickles will keep for weeks in the fridge as the vinegar acts as a natural preservative.  You can eat them after 24 hours (and we do), but the flavor will continue to improve if you can wait.  My brother-in-law considers four days to be the magic number. 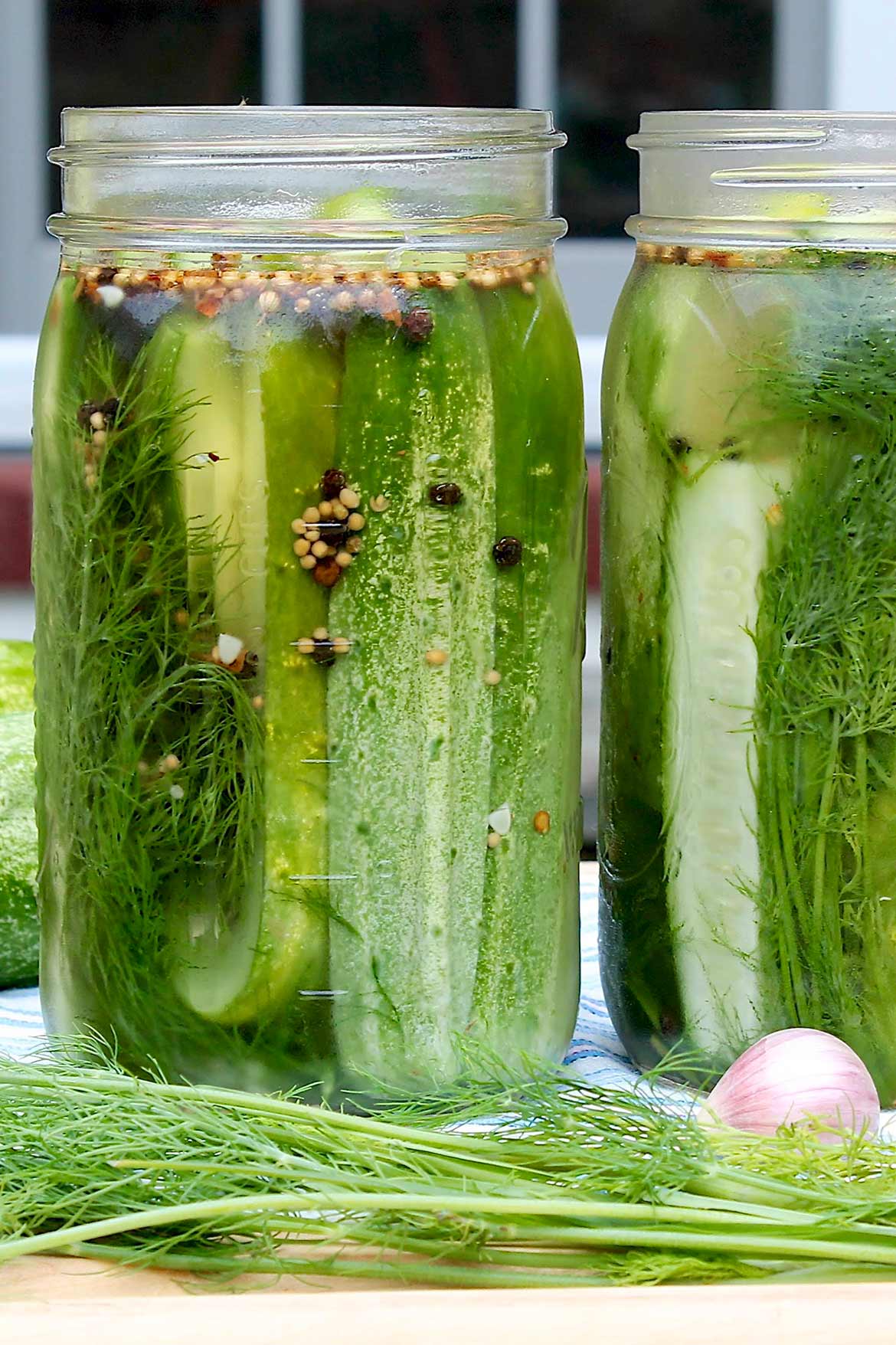 *The Department of Agriculture estimates that the average American eats 8.5 lbs of pickles a year.

*When the Philadelphia Eagles thrashed the Dallas Cowboys in sweltering heat in September 2000, many of the players attributed their win to one thing: guzzling down immense quantities of ice-cold pickle juice.

*In the Delta region of Mississippi, Kool-Aid pickles have become ridiculously popular with kids.

*Not everyone loves a sweet pickle. In America, dill pickles are twice as popular as the sweet variety. 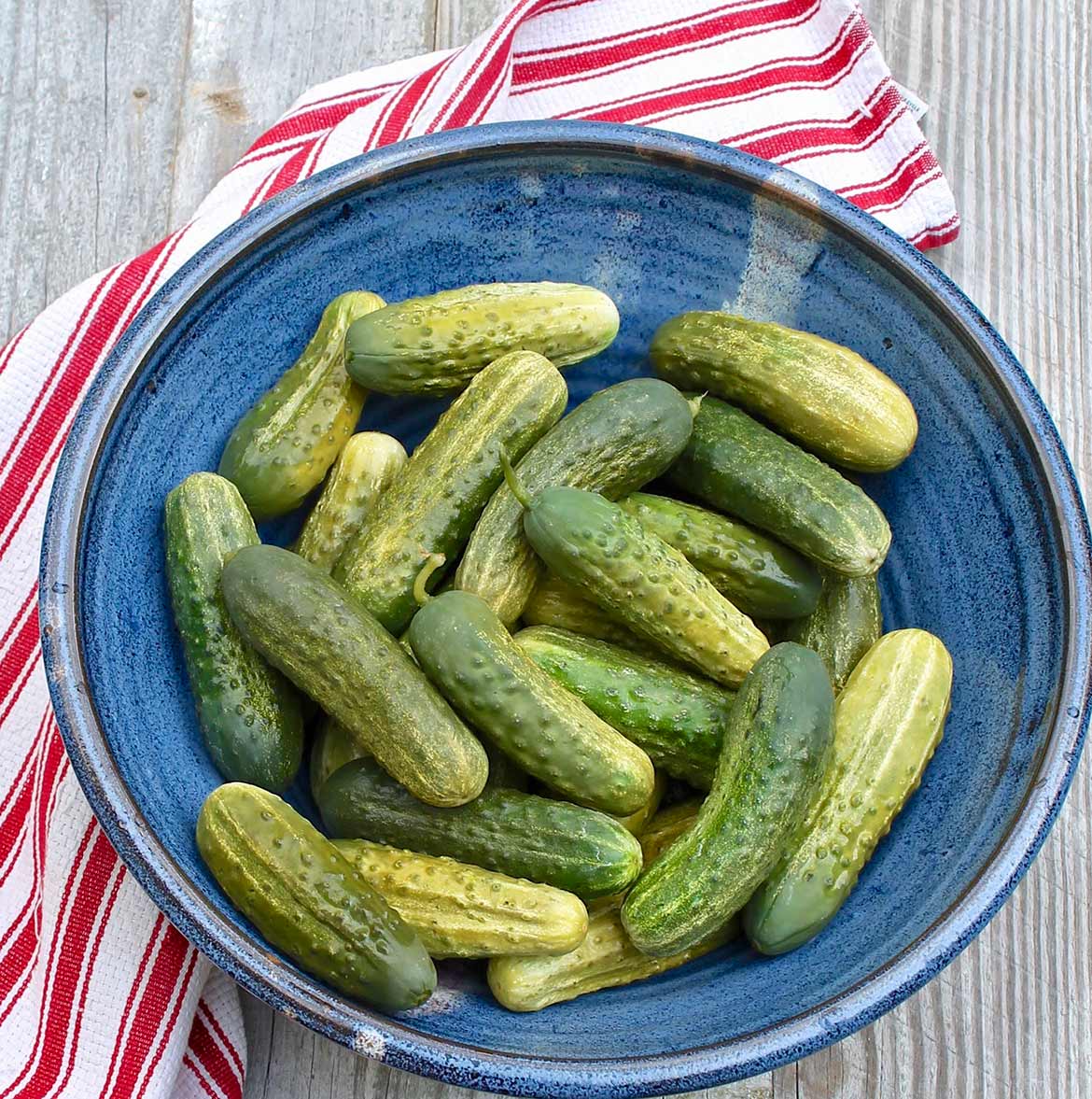 Additional pickle recipes you may enjoy: 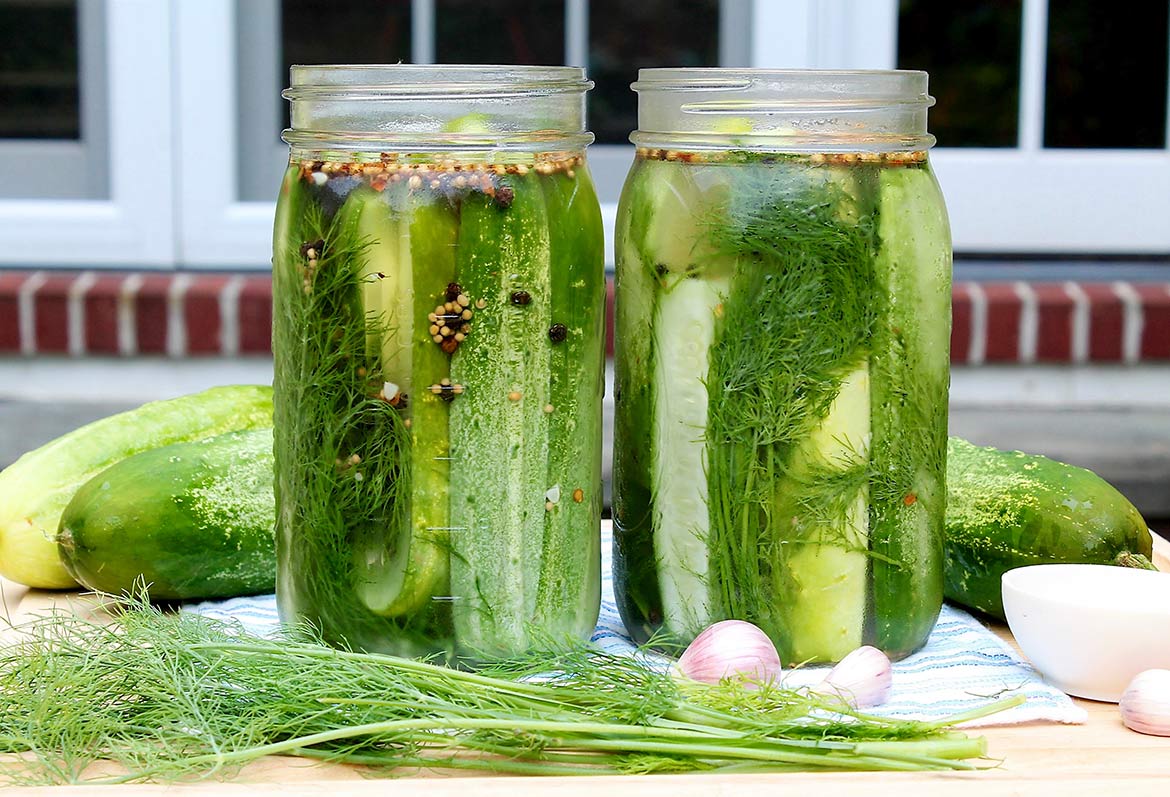 Refrigerator Dill Pickles
Yield: 2 quart jars (recipe easily halves or doubles)
No canner is needed and once the spices are assembled, these crisp pickles come together quite easily and may just become a summertime favorite!
Print
Ingredients

For the soaking step:

To make the pickles:

Soak the cucumbers: In a large, non-reactive bowl (such as ceramic or stainless steel), stir together the 6 cups water and 2 tablespoons salt.  Add the cut cucumbers, and let sit at room temperature for 12 hours.  (I place a small plate on top to ensure that all of the cucumbers are submerged.)  After 12 hours, drain but do not rinse.

Make the brine: Combine the vinegar, remaining 2 tablespoons salt, and sugar in a small non-reactive saucepan (such as stainless steel, ceramic, or Teflon) over high heat.  Stir until the salt and sugar are dissolved. Remove from the heat, and stir in the cold water.  Make head tip: At this point, the brine may be refrigerated until ready to use.

Stuff the drained cucumbers into two clean quart-size jars. Divide the dill, garlic cloves, coriander seeds, peppercorns, mustard seeds, and red pepper flakes evenly between the jars.  Pour the vinegar mixture over top.  If necessary, add a bit of cold water to the jars to ensure the cucumbers are covered. As long as the jars are well packed with cucumbers, you should not have to add much water.  Place the lid on the jars and refrigerate.  After 24 hours, the pickles will have good flavor, but the flavor will continue to improve over several days.  (My brother-in-law declares that pickle perfection occurs on Day 4.) The pickles will keep in the refrigerator for at least one month, if they last that long.

Options: Christine likes to add 1/4 teaspoon celery seed (not celery salt) to each quart jar, and several family members like a spicy dill version.  For that, I add one Serrano or red chili pepper, which I slit down the side, to each jar.  For spicier pickles, add additional peppers or a hotter pepper variety to suit your taste.

What is pickling salt?  Pickling salt (also called canning salt or preserving salt) is pure granulated salt (sodium chloride).  It doesn’t contain anti-caking ingredients or iodine, which can turn pickling liquid cloudy or make the pickles dark.  Pickling salt’s granules are finer than kosher or table salt, making them easy to dissolve in a brine. That said, the finer granule means, tablespoon for tablespoon, you end up using more salt and your pickles will taste saltier.  Morton and Ball are two common brands available at grocery stores, usually in the salt section or next to the canning jars in hardware stores.  To avoid clumping, pickling salt should be stored in an airtight container away from moisture.

Is pickling salt really necessary?  While pickling salt is certainly designed for pickling, it isn’t the only salt that can be used. Kosher salt is a great alternative.  Generally speaking, it’s recommended to use a brand like Diamond Crystal, which is pure salt with no additives.  Morton contains anti-caking agents, although I have used this brand and was hard-pressed to notice any clouding. Pure sea salt can also be used in pickling.  Again, the size of the grain will affect the level of saltiness.

Although table salt is perfectly safe to use in pickling, it isn’t recommended because the quality of pickles may suffer due to its additives.  I have not tried table salt to offer a first hand opinion.

Bottom line:  I use kosher salt because it’s what I have on hand and prefer the slightly less-salty taste created by the larger granules.

I’m also happy to report that Just A Pinch Recipes included this pickle recipe in a collection of 18 Go-To Refrigerator Pickle Recipes. The roundup includes a little something spicy, something sweet, garlicky and even half sours.

For those who may not be familiar, Just A Pinch Recipes is a coming-together of hometown cooks that feels like and old-fashioned recipe swap. They aim to share timeless, proven recipes that have passed through generations－a mission I wholeheartedly embrace!