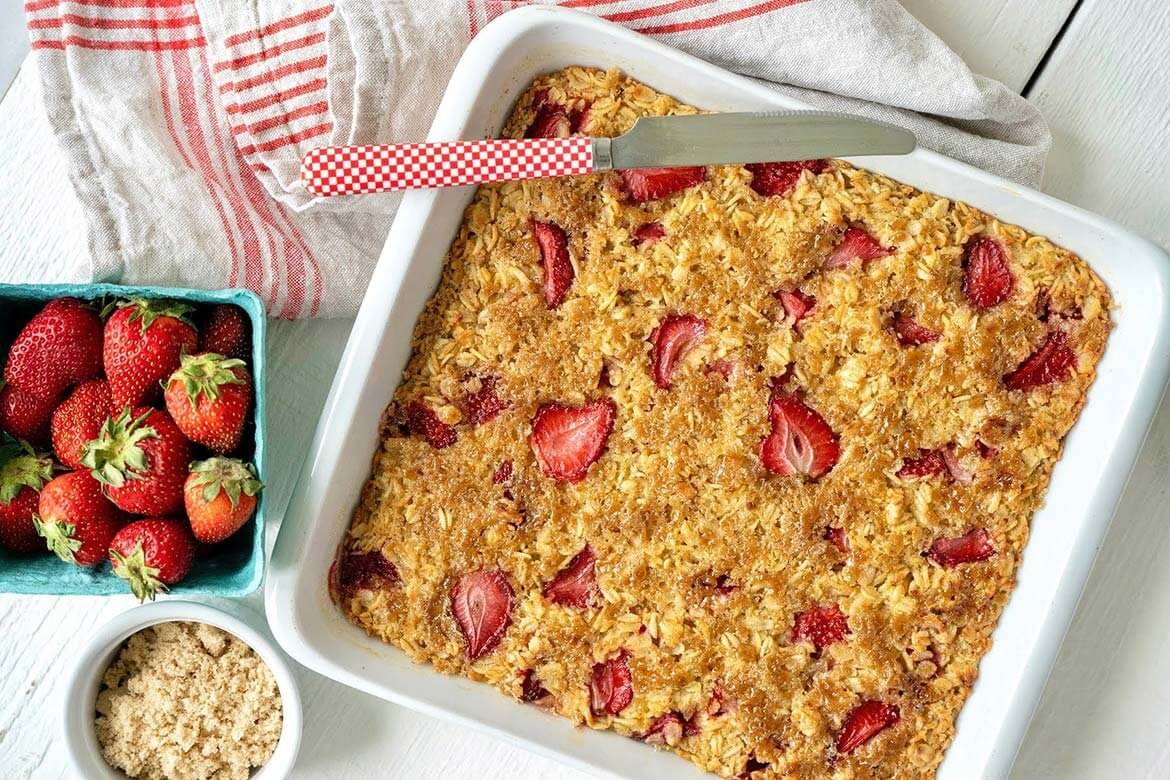 Red, ripe strawberries highlight this seasonal favorite, which offers make-ahead convenience and countless ways to customize. In a pinch, frozen berries may be used.

I clearly remember the first time I served this seasonal addition of my original baked oatmeal recipe.

My younger son, who was a rather picky fourth grader at the time, asked if I would make it for breakfast every day. After a few more bites, he asked if I could bring enough to school for a class snack.

It was an unequivocal vote of approval from one of my toughest critics!

Because Overnight Crunchy Top Baked Oatmeal was such a hit with my readers when I first started this blog, I used that recipe as the initial springboard when I began creating seasonal variations.

Baked oatmeal, after all, offers a healthy, make-ahead breakfast with broad appeal. Even those who shun “mushy” stovetop oatmeal have been known to happily dig into this more muffin-like alternative.

What could be better than a menu of flavors to choose among?

And if there’s anything I’ve learned over the many years of making baked oatmeals for my family, it’s that these recipes are endlessly versatile and incredibly forgiving.

Despite the fact that recipe perfection had seemingly been achieved, there’s reason to deviate from the plan on occasion.

Perhaps you are out of an ingredient. Or maybe you’re cooking for someone with a food allergy. Maybe you’re trying to reduce your sugar intake. All of these issues and more can be accommodated easily and successfully within the following recipe framework. 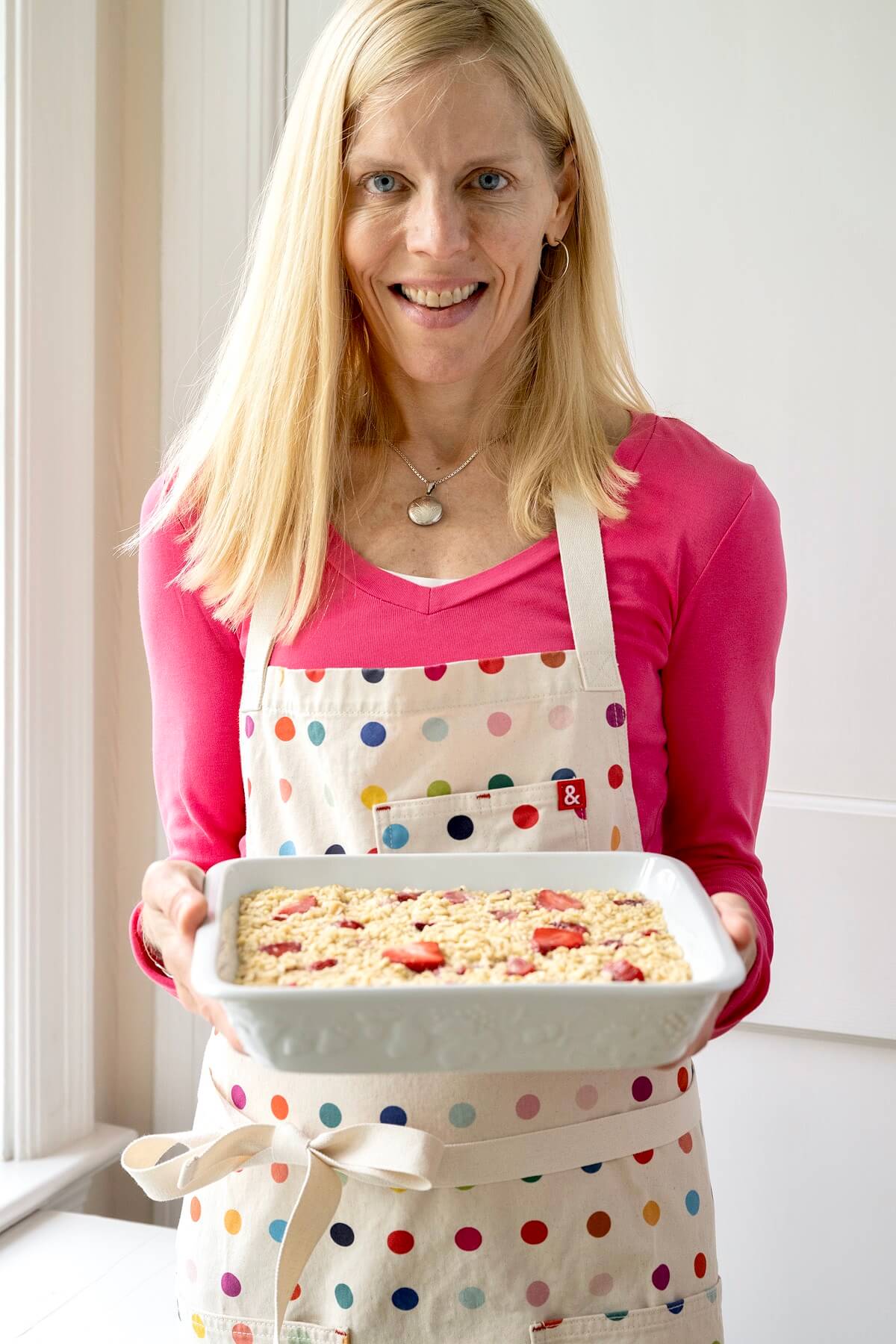 How to adapt the recipe as written:

My original intent with this recipe was to achieve the luxurious flavor of sweet cream. After all, strawberries and cream are a match made in heaven.

For many years, I relied on canned coconut milk instead of traditional milk or actual cream in this recipe. The mild tropical flavor pairs beautifully with the berries, and the use of coconut oil further complements the flavors and creates a delightful aroma while baking.

• Over the ensuing years, however, I’ve used almost every kind of milk with good results. That choice and my current go-tos are listed in the recipe.

• Similarly, while I personally adore the subtle flavor afforded by coconut oil, melted butter or vegetable oil may be used instead. (Generally speaking, I use safflower oil as my go-to vegetable oil, but even a fruity or mild olive oil could be used here.) 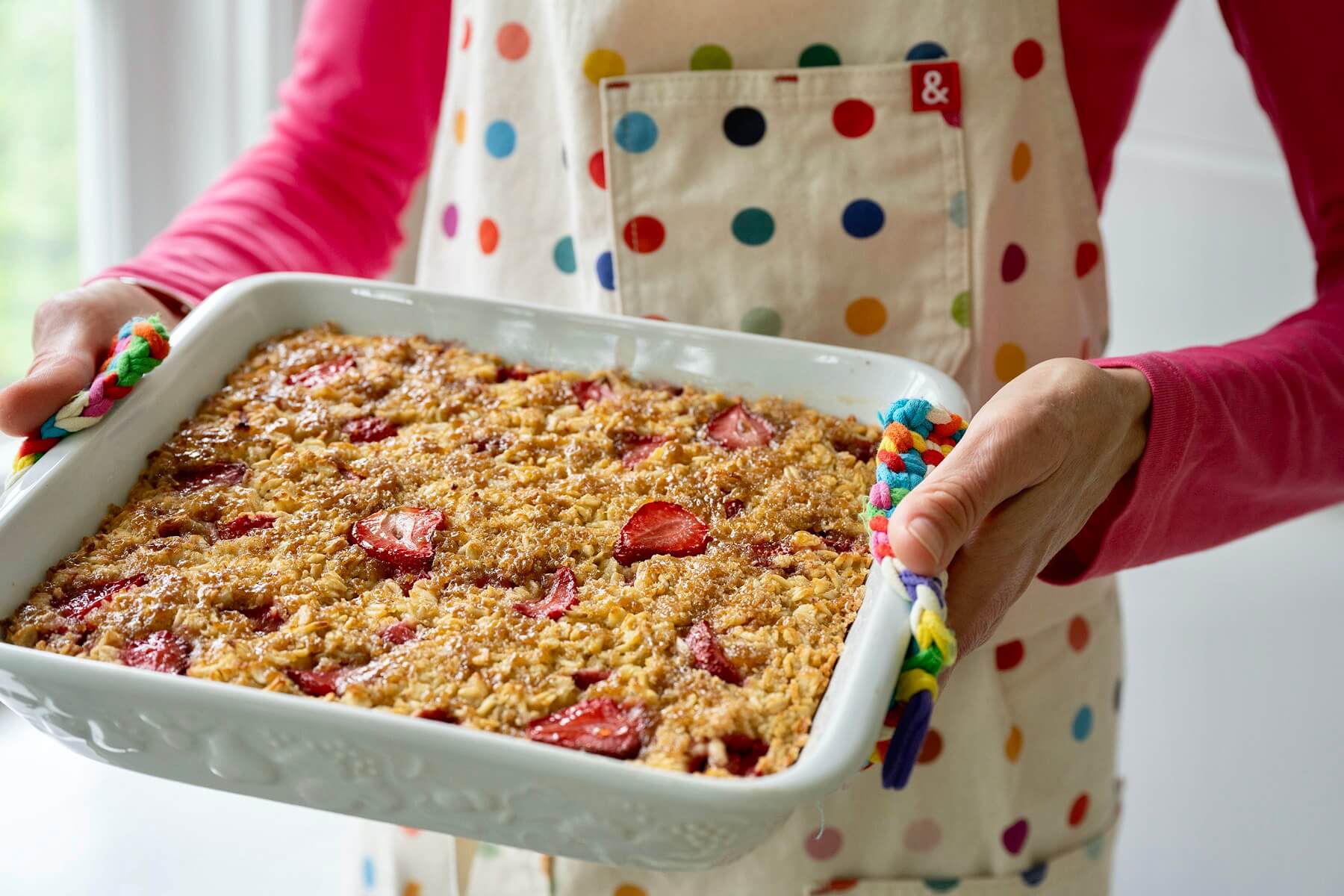 This recipe is flexible that way. And there’s more.

• Don’t have fresh strawberries? While fresh, seasonal berries afford the best flavor and natural sweetness, frozen offer a worthy alternative. In this case, I don’t thaw the berries but rather allow them to sit at room temperature for a few minutes, which softens them just enough to easily slice with a sharp knife.

• If you really enjoy coconut and/or nuts, you may stir some in or use as a topping.

• Though the recipe calls for real maple syrup to be used in the oatmeal (and the flavor is lovely!), any type of sweetener, syrup or granular, could be used instead. Brown sugar is my top pick for the broiled topping, but coarse sugar or regular granulated would also work.

• Looking to reduce your sugar intake? You can scale back without dramatically changing the texture of the baked oatmeal. In my recipes, I do always try to use the least amount of sugar needed to achieve great taste. But to further decrease it in this case, I’d start by reducing the sweetener in the body of the recipe by a tablespoon or two. I would then reduce the broiled brown sugar topping to three tablespoons. Ultimately, the crunchy, sweet topping means that you get an initial taste of sweetness, which in turn makes it harder to detect less added sugar throughout.

• I initially used the grated apple to enhance flavor and reduce the amount of oil and sweetener needed, although I’ve used applesauce (even mashed overripe banana) many times since as a quick substitute. Conveniently, single serving applesauce cups are easy to have on hand and just the right size. When using an apple, I reach for a sweeter variety like Fuji or Honey Crisp and don’t bother to peel before grating (although you may).

• Additionally, I’ve mentioned a variety of pan sizes that may be used depending on what you have in your kitchen.

• Prefer to bake grab-and-go muffins instead of a casserole? There’s a simple adjustment for that, too.

• Finally, the oats will plump up and absorb the flavor of the liquidy mixture as they sit. So while I developed this recipe with the idea that it could be assembled the night before and baked in the morning, sometimes we just don’t want to wait. Happily, there are options in this department, too. 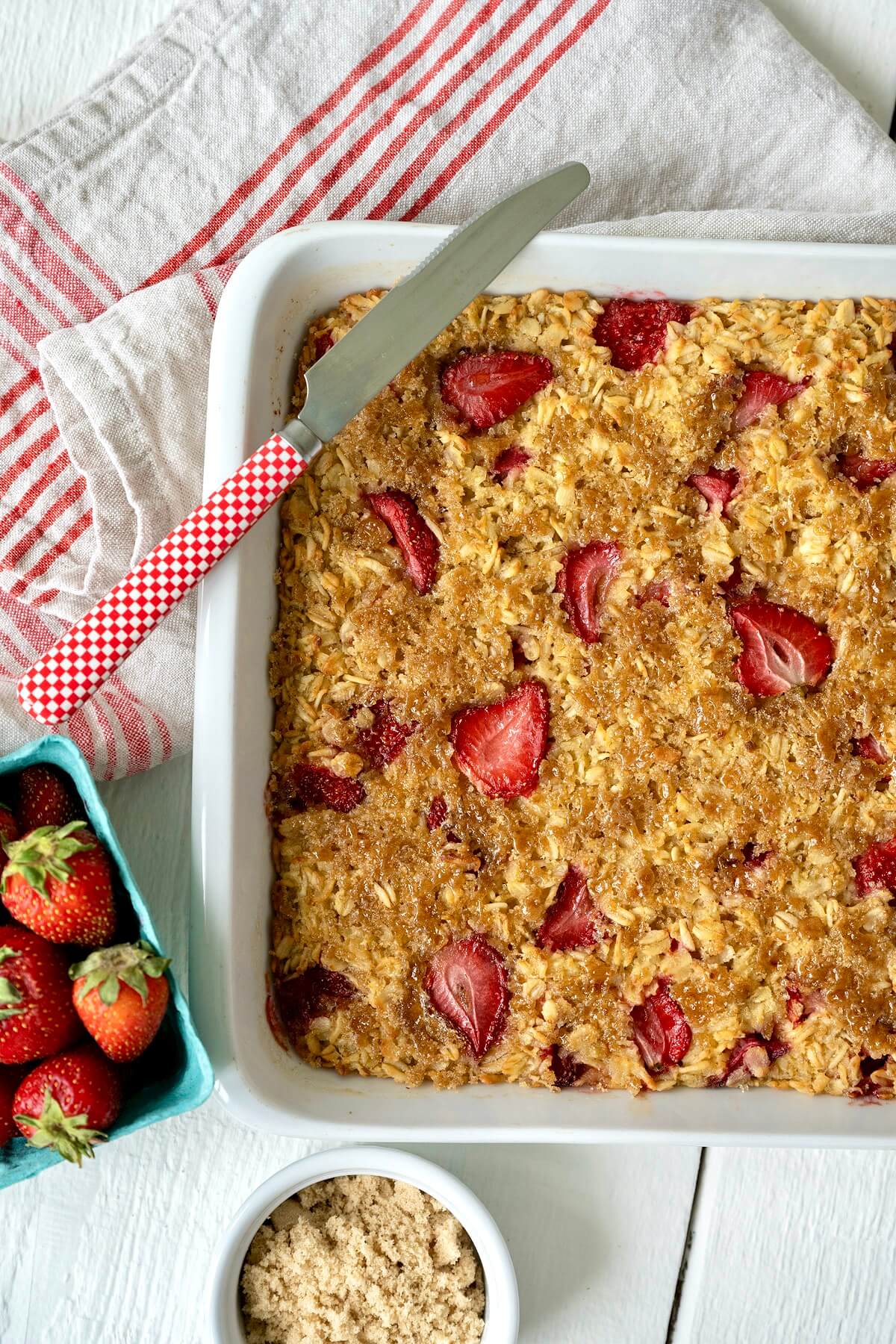 How to serve baked oatmeal?

Helpful hint: To best preserve the crunchy texture of topping when making ahead, allow the oatmeal to cook thoroughly before refrigerating, and then refrigerate, uncovered, until chilled. Once cold, cover with plastic wrap. This prevents condensation from developing, which will soften the broiled brown sugar. (But even if this happens, the oatmeal will still taste great!) 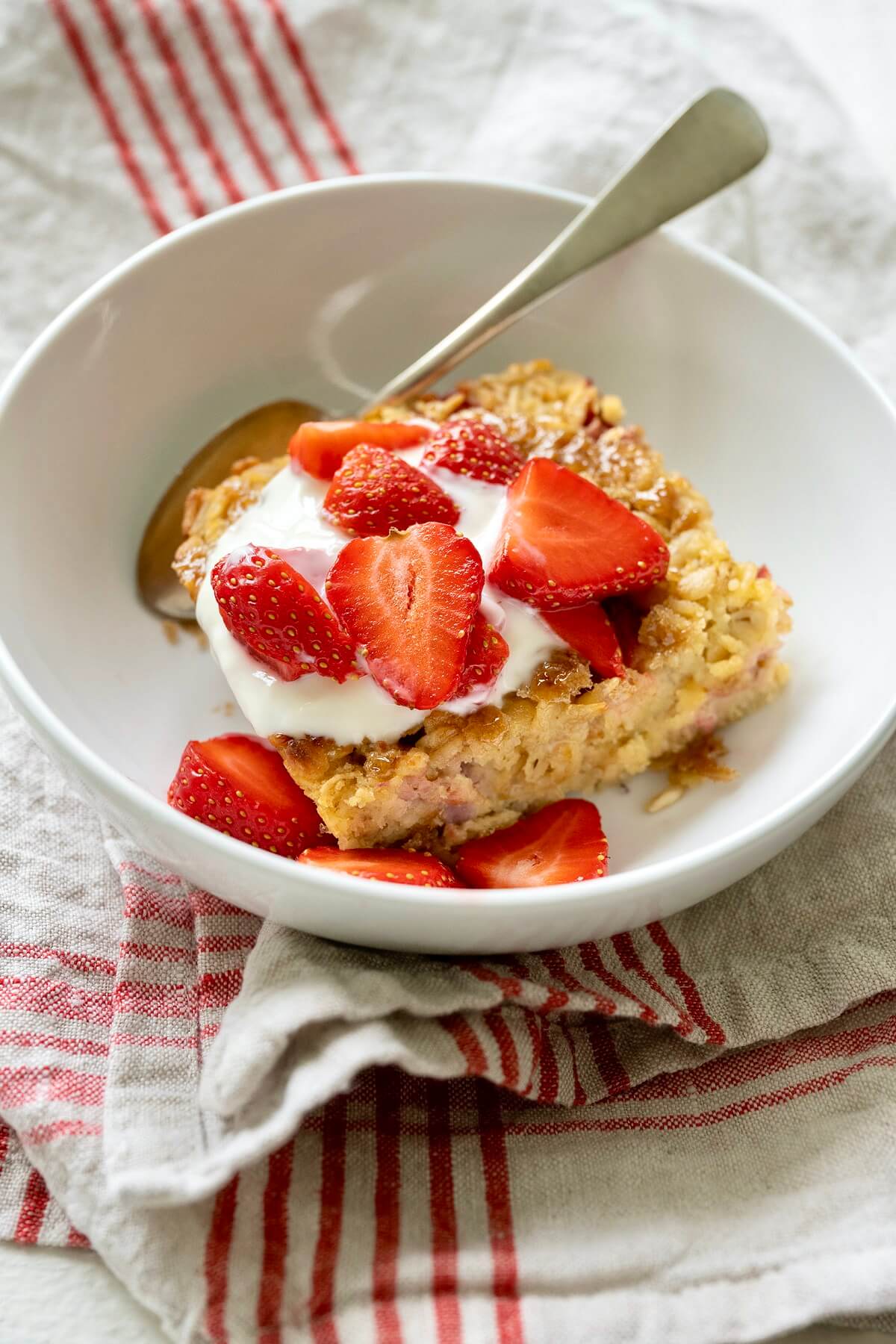 My family has long enjoyed this dish precisely as the recipe reads, but they’ve also been quite happy (and often unaware) when I’ve deviated.

Baking is said to be a precise science; baked oatmeals are the exception to that rule. By sharing the many possibilities, I’m hoping you will feel confident to try with the ingredients you have on hand and as time allows. 🍓 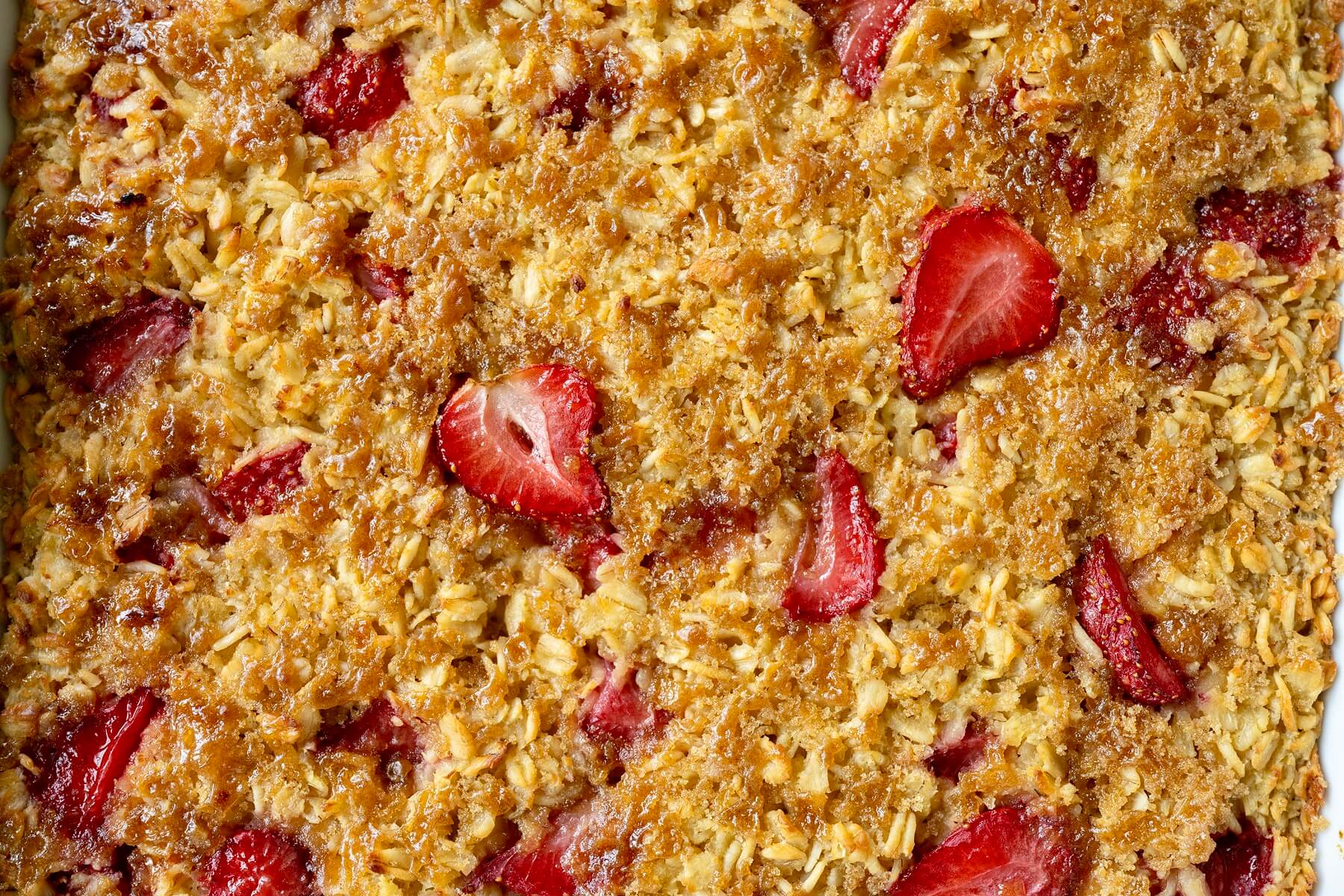 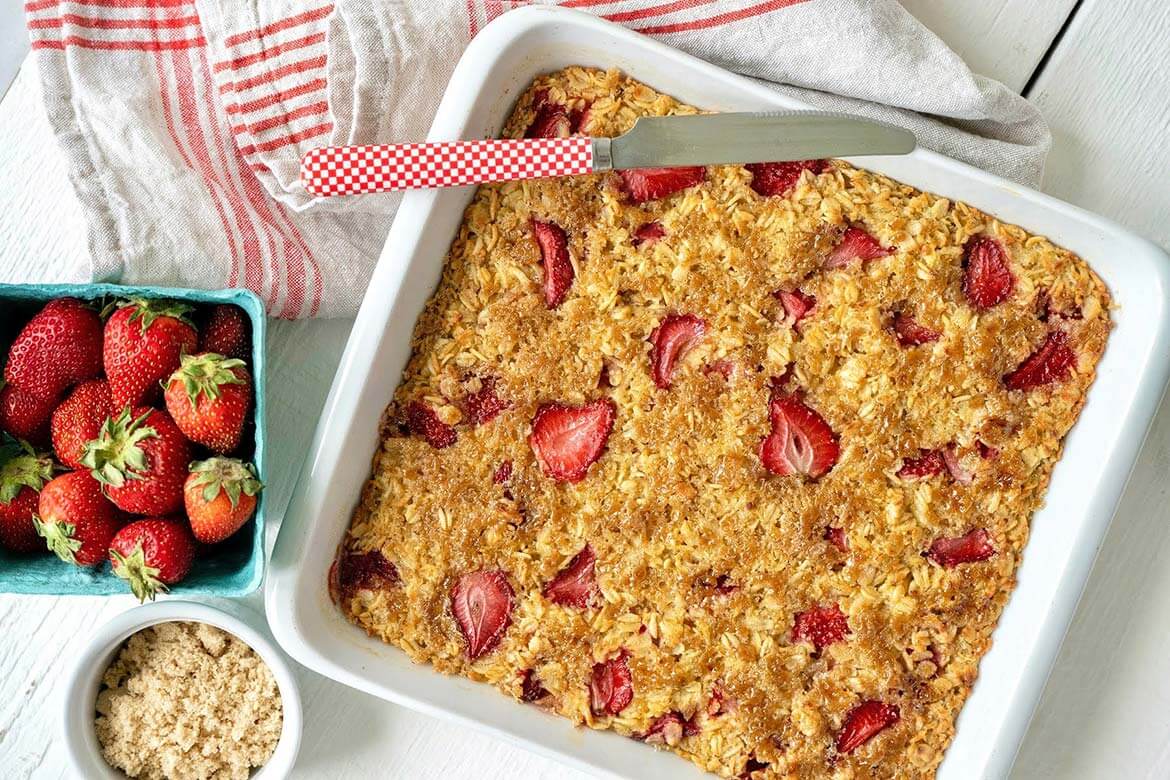 Crunchy Top Strawberry Baked Oatmeal
Yield: 8-9 servings
This delicious breakfast began as a prep-at-night, bake-in-the-morning recipe, and it works quite well that way. Over the years, however, I've discovered quite a few adjustments that can successfully be made, both in terms of baking method and flexibility of ingredients.

If using coconut oil, it's helpful to bring all of the ingredients to room temperature before mixing so the melted oil doesn't harden upon mixing.
Print
Ingredients
Instructions
Notes

When making muffins, refrigerate the uncooked oatmeal mixture in the mixing bowl, and then transfer it to the muffin tin once the liquid has been absorbed by the oats. Bake for approximately 20-25 minutes or until cooked through. Often, I will top the muffins with a teaspoon of brown sugar, some sliced almonds, and a slice of strawberry prior to baking instead of following the broil step. The recipe yields 8 regular muffins or 6 jumbo.

Which milk is best? I used to make this recipe with a (13.5-ounce) can of coconut milk (I used light) but now typically use almond or 2% milk. They all work with very modest differences in outcome. Feel free to use what you enjoy.

Helpful hint: If I’m making muffins and want to bake them sooner than later, I reduce the milk to 1¼ cups, as it’s difficult to evenly distribute a soupy oat mixture to the muffin tins. This isn’t necessary with the baking dish version, and I do ultimately prefer the recipe with the higher amount of liquid.

A few more things:
• For a less sweet topping, you may reduce the brown sugar topping by a tablespoon or two.
• Fresh, seasonal strawberries provide the best flavor and natural sweetness, but I have made this oatmeal many times with frozen berries, and it still tastes quite good. In this case, don’t thaw the berries. You will be able to slice them easily with a sharp knife once they have sat at room temperature for just a few minutes. 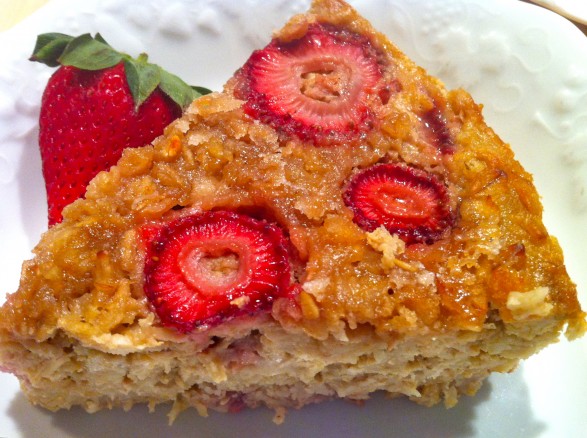 A throwback photo from when I published the recipe in 2012!

And few old photos with some additional ideas… 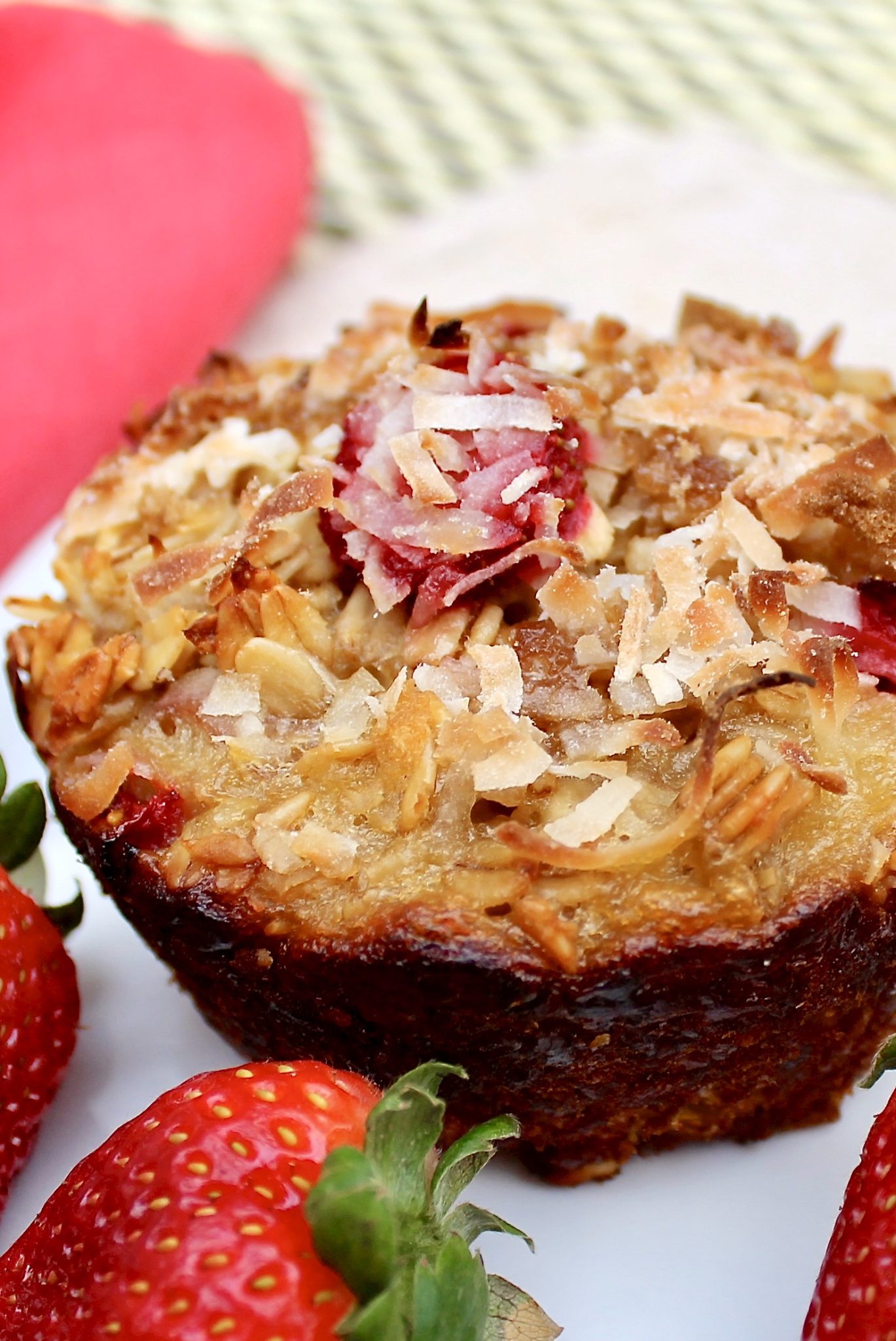 Prefer baked oatmeal muffins? There’s an easy adjustment for that in the recipe. Stirring in some shredded coconut (or topping with it) is another one of the many options. 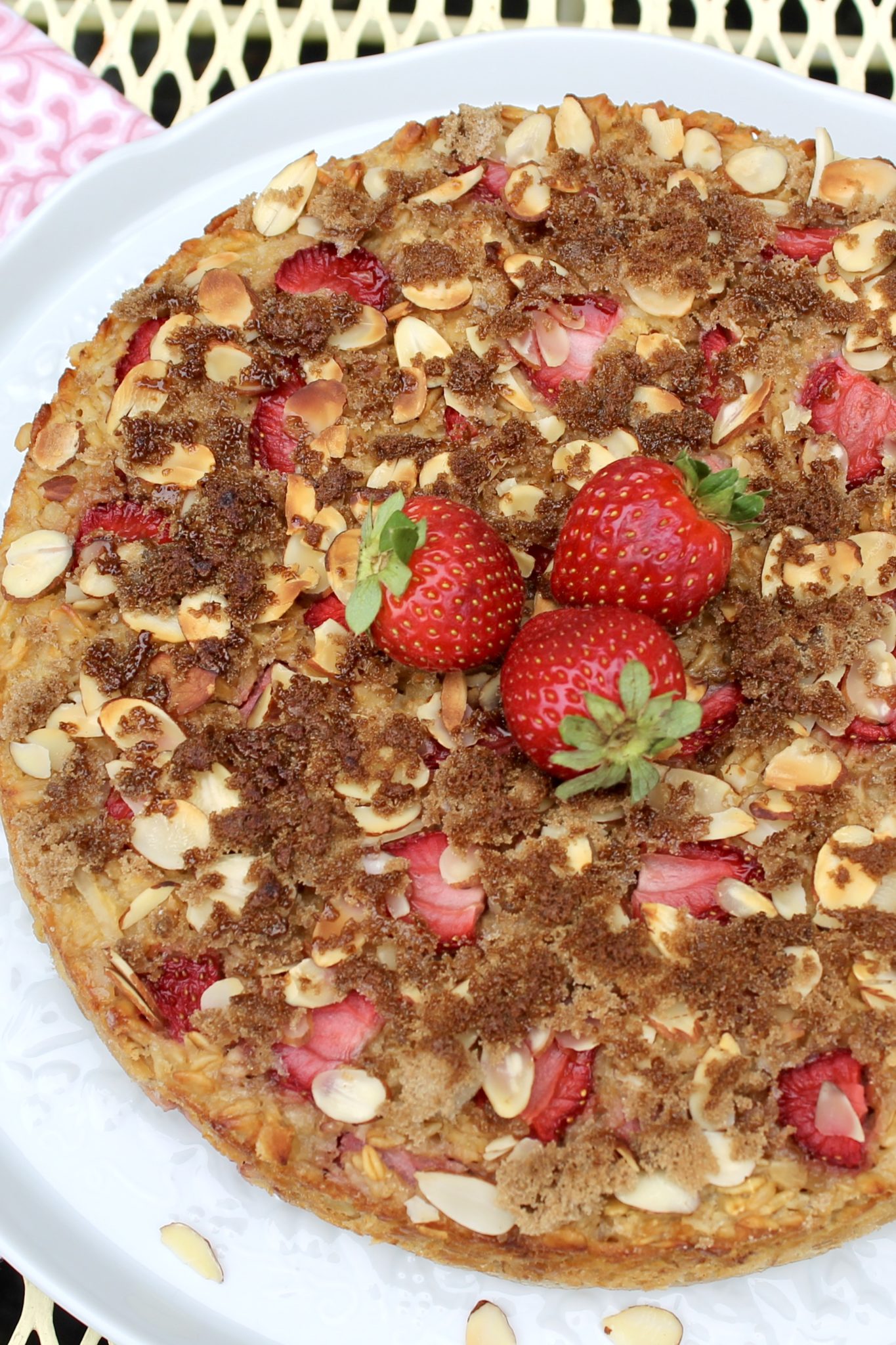 Occasionally, I bake the oatmeal in a 10-inch springform pan so I can transfer it to a cake platter. (I put candles in it for a fun birthday breakfast cake and sometimes pipe letters on it with melted white chocolate! See below.) Your largest spatula will aid in transferring the baked oatmeal from springform pan to serving platter. If you use a springform pan, allow the oat mixture to rest in the mixing bowl for at least an hour or two, and then transfer to the pan for baking. The oats will absorb the liquid and reduce the possibility of liquid seeping through the crevices of the pan. For added leak protection, place the pan on a baking sheet or wrap the bottom with a piece of aluminum foil prior to baking. 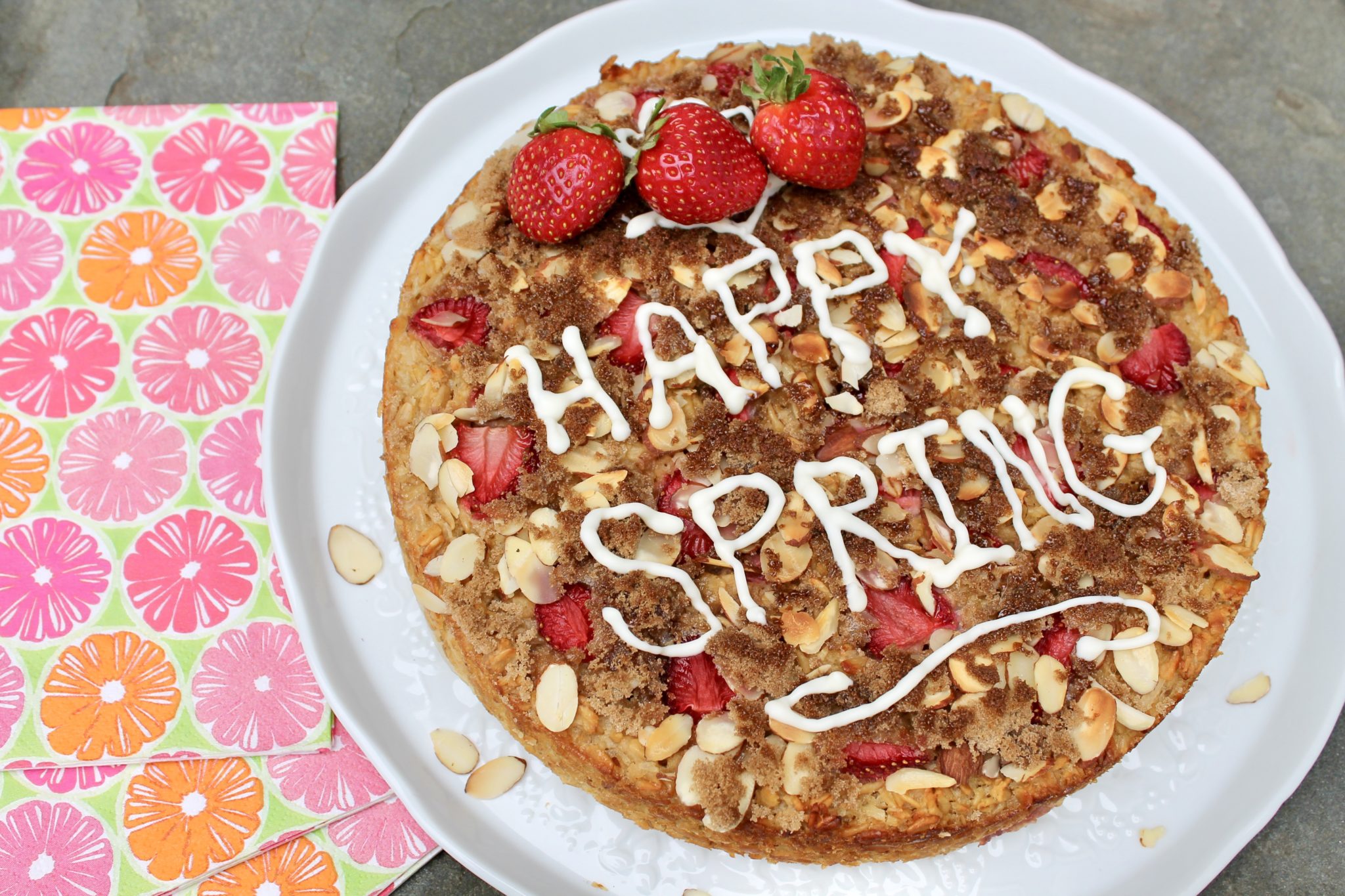