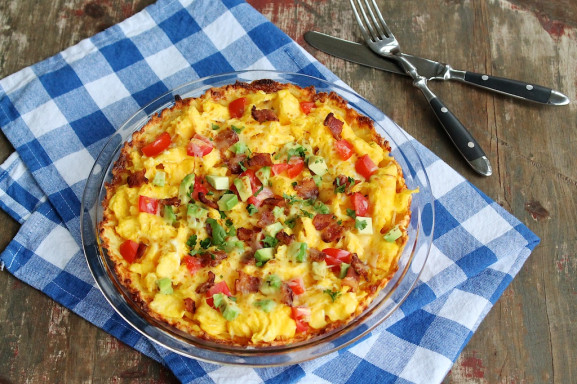 On more than one occasion, a mistake in the kitchen has led to an improvement on an old recipe or an altogether new recipe. I have cut recipes in half, only to mindlessly use the number of eggs meant for the full recipe. I have used baking soda instead of powder, spilled a little too much liquid into the mixing bowl, and completely forgotten to add the sugar to a cheesecake.

The cheesecake wasn’t so good. But the other recipes mishaps I mentioned actually taught me something. In the case of the first recipe listed below, I was certain I had a bag of frozen broccoli in my freezer. When there was no broccoli to speak of—and no spinach for an easy substitute or time to run to the grocery store—I worked with what I had.

Instead of filling my cheesy potato crust with the intended ingredients, I scrambled some eggs and topped this makeshift meal with chopped tomatoes, avocado and a little crisp bacon. Then I finished it off with a sprinkle of sharp cheddar and gave it a quick broil to melt the cheese. Just like the versatile omelet, toppings or mix-ins may be varied according to taste. That said, if you like eggs, this dish is perfectly delicious with just the eggs and cheese.  As an added bonus, the ingredients are easy to have on hand and the crust may be prepared in advance and reheated for a super-speedy meal.

The crust itself is simple yet surprisingly tasty. Shredded cheese flavors the potatoes–no butter or additional fat needed–while the eggs serve as a binder and enhance the texture. Whereas a flour crust can become mushy when wet ingredients are added, this base stands up quite well to various fillings.  What essentially began as a gluten-free alternative to a regular quiche crust has become a go-to base for many different recipes.

My improvised meal was so well liked that I have made this “mistake” on purpose many times since. In general, eggs are a popular dinner in our house, and I find I have more time to be creative with them in the evening than first thing in the morning.  That said, the following recipes would be perfect for breakfast or brunch. I have even reheated the last portion, cut it into small wedges, and served in toasted mini bagels for speedy breakfast sandwiches. They’re rather tasty!

Egg Scramble in a Cheddar Hash Brown Crust
Feel free to vary the toppings as you would your favorite omelet and according to what you have on hand. For heartier portions, you could prepare a few more scrambled eggs and pile them higher in the pie plate. An 8-inch square baking dish would work well, too. For a complete meal, serve with your favorite green vegetable or simple tossed salad. See the comments and notes before and after the second recipe for additional tips and suggestions.
Yields 4-6 servings
Print
Ingredients
Instructions
More On YouTube More on Instagram
Tried this recipe?Post a picture on instagram and we will repost it! Mention @fountainavenuekitchen or tag #fountainavenuekitchen!
The Fountain Avenue Kitchen https://fountainavenuekitchen.com/ 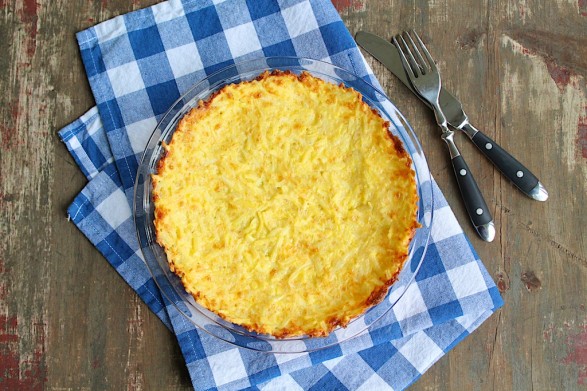 An easy, three ingredient crust that can be made ahead and reheated. No rolling required and gluten-free, too. 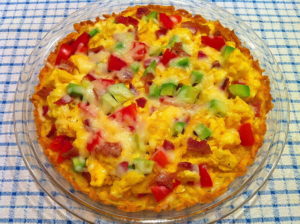 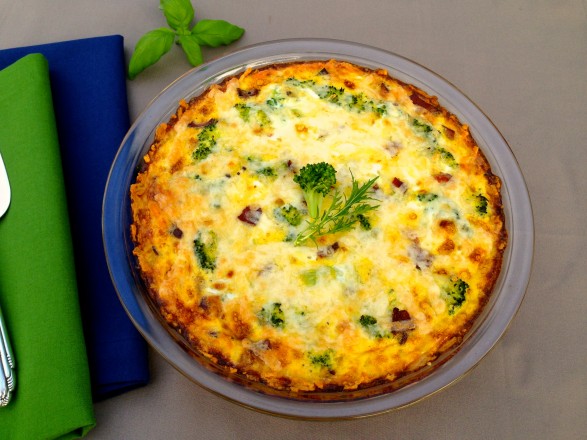 …and the originally-intended recipe — Potato Crusted Broccoli and Bacon Frittata